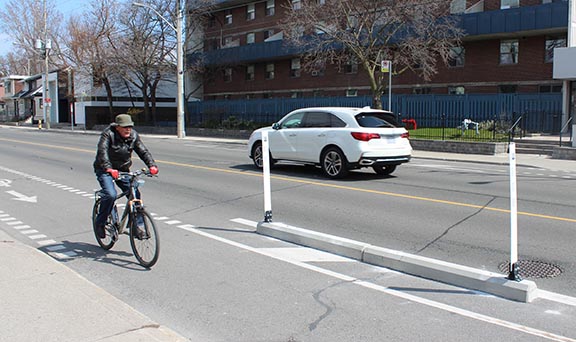 A cyclist rides in the bike lane on Woodbine Avenue in this Beach Metro News file photo.

The campaign will run from July 13 to 19, and will have officers out on major cycling and pedestrian routes across the city focusing on community engagement, education, and enforcement.

The safety focus comes in response to the city’s ActiveTO program that allowed for expanded cycling lanes and pedestrian areas so that residents could follow Toronto Public Health’s physical distancing guidelines.

“This means more cyclists are riding around our city and drivers need to be alert and anticipate sharing the road with vulnerable road users,” a Toronto police press release said.

Across major roadways and cycling lanes in East York and the Beaches, such as Danforth Avenue and Queen Street East, Toronto police officers will be conducting traffic enforcement activities, and speaking with cyclists, pedestrians, and drivers about road safety.

In 2019, a total of 64 people were killed on Toronto roads. Of those, 47 (73 per cent) were vulnerable road users including one cyclist.

Officers will also talk to drivers about “dooring incidents” that happen on busy roads, where driver opens a door onto oncoming traffic.