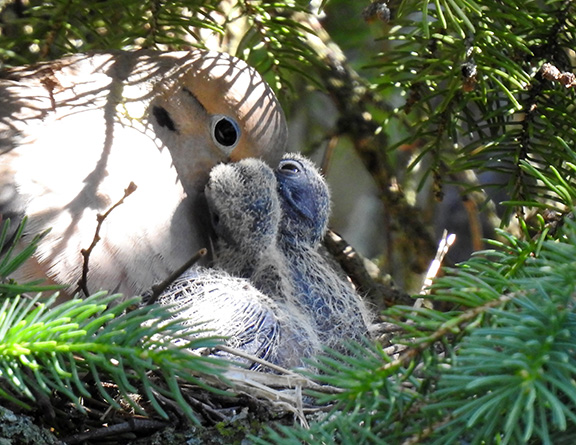 While many people have been struggling with having to stay home during the COVID-19 outbreak, and I really sympathize with those people, I’ve been able to use my birding opportunities to help me appreciate the small benefits of the quarantine.

I truly hope that the sharing of my pictures and stories has helped some of you get through the last few months as well, even if only by distracting you for a short while.

With COVID-19 still a threat, I have spent hours on my front and back porches watching a few pairs of birds nesting in my yard. While the starlings, robins, chickadees, and orioles regularly use my yard and bird houses to raise their young, and some of you know I’ve had an Eastern Screech Owl successfully raise several owlets, for just the second time in the last 13 years a pair of mourning doves has hatched several chicks in one of my trees.

Over the last few weeks I’ve learned so much about the development of the baby doves and the behaviour of the adults by spending dozens and dozens of hours watching them.

This all began one day, a few weeks ago, while I watched through the window with excitement as a dove was picking up sticks from my front yard and only taking them as far away as my front tree. The male was chasing the female, and significantly slowing down the nest building, while making that amazing cooooOOOOO-woo-woo-woo sound that only the males can make.

Shortly after, the male began to bring sticks to the tree, while the female dove wove them into a functioning nest. They built it in the perfect location for all of us. It was well protected from predators and the weather, while also being right in front of my front porch, where I could sit, protected in all weather, and watch the activities.

While I’ve spent hours sitting there watching the family, I’ve also spent a not insignificant amount of time explaining to people walking down the street what I’m doing. For the record: no, I’m not spying on my neighbours across the road. I’ve let several people come up, if they promise to keep their distance, and let them look through my camera at the antics of the doves.

Some of my observation highlights: The two babies, twins, are fed at the same time! One chick will sit on each side of the adult, who will continuously regurgitate the food back and forth between them. This is very different from other birds who will feed only one baby at a time, before heading out to find more food for the rest.

Feedings last for about 15 to 20 minutes, or whenever the babies are full, and afterwards the chicks tuck under the chest of one of the adults. One time I saw the male, who was sitting on the nest, trying to also feed from the female and was kicking the babies to the side to make more room for him! Both the male and female will feed the chicks and they take turns on the nest about every three to four hours.

I have had many good laughs as the arriving parent will kick the nesting adult off the nest as its ‘their turn’ to sit and have a break. That’s not too different from many human parents I’ve known over the years: “Its your turn to go do X and it’s my turn to have a break!”.

Please see the attached link to see a video of the feeding of the twins ( https://youtu.be/VVewzPLI0Wk )

I have also learned the following, over the last few weeks: Many of us knew that mourning doves were ground feeders, as we often see them walking around under bird feeders instead of actually at them, but did you know that they stockpile seeds in a crop, which is an enlarged part of their esophagus, to digest later?

Also, the babies are fed crop milk or pigeon milk, which is high in protein and fat. Pigeon milk is secreted by the adults’ crop lining and then regurgitated into a chicks mouth with the rest of their food! Fascinating and gross!

My various birding books say they consistently lay two eggs, which take two weeks to hatch, and then another two weeks for the chicks to fly or fledge. They sure like the number two.

Here’s one final anecdote: I said before that the nest was well protected, but that doesn’t mean it’s perfectly safe. On the 13th day after the hatchings, I was having my coffee outside when suddenly a blue jay attacked the nest! The blue jay was bouncing from branch to branch trying to get close to the babies. It’s uncommon, but not unheard of, for blue jays to opportunistically attack and eat available chicks.

I was honestly getting worried when, out of nowhere, the male mourning dove came to the nest and helped protect the babies and female. He quickly chased the blue jay away from the nest and made sure he was gone. Then, as though nothing had happened, he flew over to a hydro wire, sat down, and started to coo. Superdove to the rescue!