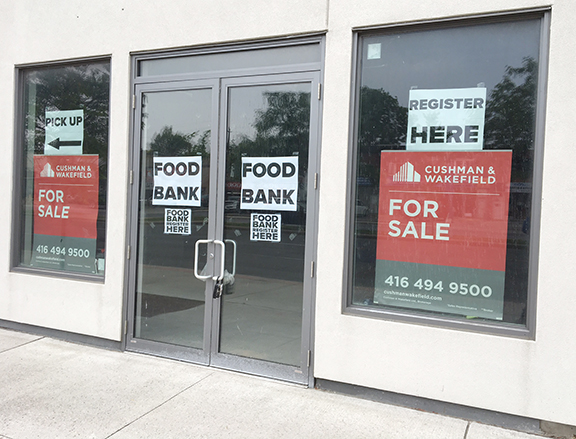 The Cliffside Pop-Up Food Bank on Kingston Road, just east of Cliffside Drive, operates on Thursdays from 2 to 4 p.m. Photo by Alan Shackleton.

A local emergency food bank doesn’t qualify for any of the $350 million of federal money for charities in response to COVID-19.

The pandemic forced several food banks across the community to close for health precautions. That’s when the Scarborough Food Security Initiative was born – it offered emergency food assistance in southwest Scarborough – essentially filling the gap left behind by closed food banks.

After months of volunteer deliveries in the midst of a pandemic, SFSI is seeking funding sources as it doesn’t meet the qualifications set out by the federal government.

“We’re a grassroots organization starting out because of COVID-19,” SFSI founder Suman Roy said. “We’re not registered, and we haven’t been in existence since 2019.”

Roy referenced one of the requirements in the red tape involved to get some of the $350 million funding. The federal government gave United Way, Community Foundations of Canada, and the Canadian Red Cross the funding to confirm qualification and distribute accordingly.

United Way and Community Foundations support registered charities – SFSI has yet to obtain registered charity status as its only been around for three months, and the status takes six to eight months to obtain. The Canadian Red Cross supports non-profit organizations like SFSI, but in order to get funding non-profits had to have been around since last year.

It’s a mess of red tape that Roy understands, but nevertheless still holds back the charity’s operations.

“They put these in place so it’s not going to the wrong groups,” he said. “But that’s why there are committees that decide where the money goes, they need to decide per organization and not make a decision that blocks some from day one.”

Since the start of the COVID-19 pandemic, SFSI has made more than 11,500 emergency food deliveries and counting.

It’s first response came when Bluffs Food Bank closed two weeks in March. Roy and a few volunteers thought about finding a solution for the 350 households that the food bank serviced.

“We did not think it would grow as big as it did,” Roy said.

As always, SFSI maintains its delivery food bank. It’s also recently started a drop-in meal program in partnership with the Royal Canadian Legion Branch 13 at 1577 Kingston Rd. The meals will be Monday, Wednesday, and Friday from 11:30 a.m. to 1 p.m.

Roy is trying to get some corporate partnerships, having received significant initial support from Toyota Canada.

SFSI is trying to raise funds for a new space after temporarily using space at Warden Woods Community Centre before it closed.

Local residents continue to donate whatever they can, Roy said.

“That’s our bread and butter,” he added.