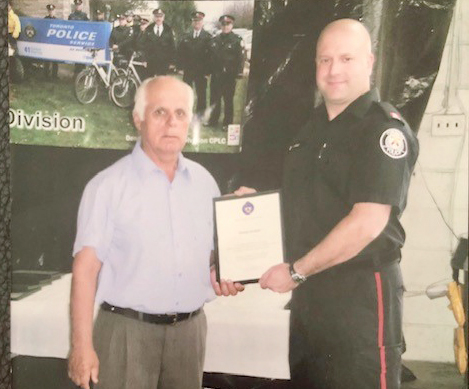 Danny Sardelis is presented with an award by Toronto police in 54 Division for his years of work as a crossing guard at Coxwell Avenue and Plains Road. Sardelis, who managed the Bus Terminal Diner on Danforth Avenue for 40 years, died last month from COVID-19. Photo: Submitted.

He raised a family, built a business, and gained an honourable reputation in the East York community.

Dionisios (Danny) Sardelis died on May 11 at the age of 79 at Michael Garron Hospital, four days after he fell ill with COVID-19.

“At first I didn’t believe it,” local realtor Hugh Green said. “I had to call his house, I was in a shock for a couple days, I just couldn’t believe it was him.”

Sardelis was a crossing guard for almost 15 years at the busy intersection of Coxwell Avenue and Plains Road. It was there he safely guided students of East York Collegiate Institute and Diefenbaker Elementary School, and where he made many friends with members of the community.

He used to leave his belongings at Green’s real estate office just north of the intersection, where Green got to know him “three times a day in the last 10 years.”

“I looked at him as somebody who was the eyes and ears of the Coxwell/O’Connor neighbourhood,” East York Hall of Fame Association president Justin Van Dette said.

“It’s a huge loss to the community, it’s very sad he passed away.”

Van Dette suggested a plaque be displayed on the fence of East York Collegiate Institute to commemorate Sardelis’ years of service.

Sardelis was known and well-liked not just for his role as a crossing guard, but the role he played in the community for 40 years as proprietor of the Bus Terminal Diner at Danforth and Coxwell avenues.

He received a citation for 10 years of service from Toronto Police Service’s 54 Division, and also was given an award of merit for his work as a crossing guard in his retirement.

It was there many members of the community, including TTC drivers, got to know Sardelis. The diner supported his family, and it’s where he retired from in 2004 before becoming a crossing guard.

Sardelis married Angela Sarantopoulou in 1975, and they lived together in East York since. He is remembered by his wife Angela, his son Peter, his daughter Angie, his son-in-law and Angie’s husband Panos, his two grandsons Marios and Danny, and siblings George and Georgia.

Due to COVID-19 physical distancing protocols, his family waved him goodbye outside his hospital room, and his funeral service was attended by just nine people on May 15 at St. Demetrios Greek Orthodox Church. The service was conducted by Father K. Pavlides and interment followed at Pine Hills Cemetery.

At a meeting on May 28, Toronto Council observed a moment of silence for Sardelis.

“Toronto and Canada have lost a stalwart of the East York Greek community and Danny’s family have lost a loving and devoted husband, father, grandfather, and brother,” part of the motion read. “The City Clerk is requested to convey, on behalf of Members of Toronto City Council, our sincere sympathy to the Sardelis family.”