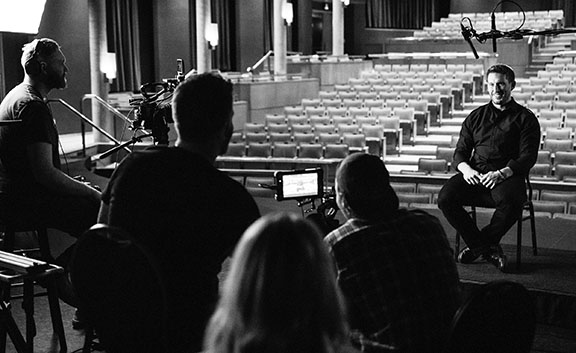 Rich Clune being interviewed for the documentary film Hi, My Name is Dicky. Inset shows the poster for the film. Photos; Upper Canada Films.

Pro hockey player Rich Clune knew that when he was asked to take part in a documentary film about athletes overcoming addiction and mental health issues, there was no question that the skating scenes would be shot at Ted Reeve Arena – the place he first learned to skate and play the game.

“It was non-negotiable that those scenes be shot at Ted Reeve,” Clune, 33, said in an email interview with Beach Metro News recently.

“It holds a special place in my childhood.”

An East Toronto native, Clune is a 14-year pro hockey veteran, having been drafted by the Dallas Stars 71st overall in the 2005 National Hockey League Entry Draft as a forward.

During his career he has played for the Los Angeles Kings, the Nashville Predators, and the Toronto Maple Leafs in the National Hockey League.

He has been a member of the Leafs’ American Hockey League team the Toronto Marlies since 2015, though no pro hockey is currently being played due to the COVID-19 pandemic.

However, Clune’s hockey career and his personal life has had its challenges as he dealt with drug and alcohol addiction and mental health issues.

Last year, a mutual friend connected him with filmmakers Taylor Prestidge and Haris Usanovic who were interested in making a documentary on Clune’s experiences and his road to recovery which has seen him clean and sober for the past 10 years. The result is the film, Hi, My Name Is Dicky.

The documentary takes an unvarnished look at Clune’s career and his personal challenges through interviews and other scenes including the on-ice shots from Ted Reeve Arena.

“They had an interesting idea with how to approach my story,” said Clune. “Our hope is that we achieve awareness surrounding addiction and mental illness, while also inspiring people to work hard and to lead happy lives.”

Clune grew up on Keystone Avenue in the Woodbine and Danforth area and now lives in the Beach near Queen Street East and Lee Avenue.

Growing up he and his brothers (Matt and Ben) took skating lessons and hockey school taught by his dad Tom Clune at Ted Reeve Arena.

Tom Clune had an impressive hockey career himself, having played U.S. college hockey and then in a semi-pro league in Sweden.

Clune said he has nothing but fond memories of his times playing with the Ted Reeve Hockey Association as youngster.

“I loved having an orange soda after scoring a hat trick, that was my reward,” he remembered. “Playing with my brothers were some of my favourite memories to this day, and going to the hockey school at Ted Reeve where my dad coached at.”

As his hockey skills developed, Clune went on to play minor hockey with the Toronto Marlboroughs Minor Midget AAA team, and then Major Junior in the Ontario Hockey League with the Sarnia Sting and Barrie Colts.

From Grade 7 on, Clune attended St. Michael’s College School. Prior to that he was a student at St. Brigid Catholic School.

Clune’s advice to young athletes, and to all people, who are facing difficult challenges in their life is to not be afraid to ask for help.

“There’s no shame in asking for help, with whatever it is you’re struggling with,” he said.

Like millions of others around the world dealing with the COVID-19 pandemic, Clune is now in a waiting game at home until he can get back to his job which in his case is pro hockey player.

“I’m continuing to train hard on my own at my house and will pick back up with hockey in Toronto once the economy opens back up,” he said.

For more information on Hi, My Name is Dicky, and to see a trailer, please go to https://www.youtube.com/watch?v=tduucbjqeXQ