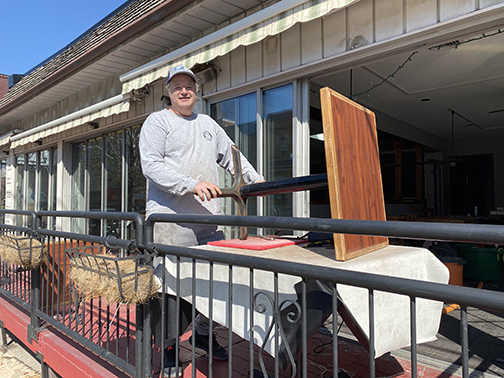 Owner Peter Martineu works on fixing tables outside The Beacher Cafe while the restaurant is closed during the COVID-19 crisis. Photo by Susan Legge.

As rumours are flying in the community about the imminent closure of The Beacher Café’s doors for good, owner Peter Martineau says a final decision has not been made on the restaurant’s future.

‘We have no idea if we are going in business or out of business,” he told Beach Metro News in a phone interview early Friday, May 8, afternoon.

Martineau said the future of the beloved community restaurant at Queen Street East and Maclean Avenue, is now basically in the hands of his landlord.

He said he had talked to Beaches-East York MP Nathaniel Erskine-Smith earlier in the day on Friday, and he was hoping for some political help with his landlord situation.

“He said he would try and help,” said Martineau of Erskine-Smith.

In an interview with Beach Metro News Friday, Erskine-Smith confirmed he had spoken with Martineau and that he was making landlords aware of the supports being offered to them by the federal government during the COVID-19 crisis.

“I am looking into it and I have been speaking to a number of landlords including his,” said Erskine-Smith. “I’m making them aware of the kinds of programs available.”

He said that he was “relatively confident” that most local landlords, especially those with roots in the community, were onboard with helping local businesses stay open.

“In terms of the specific negotiations (regarding The Beacher Café), I don’t know how that one will go,” said Erskine-Smith. Martineau said the latest he’s heard from his landlord is that he is expected to pay his rent for the restaurant, either now or as a deferred payment once the COVID-19 crisis has passed and businesses such as restaurants are allowed to re-open again.

The landlords of The Beacher Café building are Frank and Rick Gabriele.

In an interview Friday afternoon with Beach Metro News, Rick Gabriele said he is perfectly willing to work with tenants and use the programs available during the COVID-19 to help keep them in business.

“I care about the Beach and our tenants,” he said.

Rick said he is waiting for the final terms of the federal government’s rent-relief programs to be officially released. “I can’t commit in writing until we see the details. Once we have the details, we’ll be fine and we should see those by May 15 I hope.”

A director with the Beach Village BIA and a long-time member of the community who holds the leases on a number of well-known local businesses, Rick said he absolutely wants to help his tenants get through the COVID-19 crisis.

“I have no problem helping them out. They are like family,” he said.

Rick said he will be participating in pandemic rent-relief programs offered by the government as “a willing partner” for as long as they last.

Martineau and his family have run The Beacher Café since 1999.

The restaurant was originally opened in 1981.

Martineau said his latest discussion with his landlord was being told “to go and get a lawyer.” Martineau has also made the statement about being told to get a lawyer in Facebook posts as well.

Rick Gabriele said that he did advise Martineau to seek legal advice, but that was over a specific point of the lease called a Force Majeure which deals with “unforeseeable and irresistible events” with external causes beyond the control of either a tenant or a landlord.

“I can’t give him legal advice on that, so I told him to get a lawyer.”

The news of The Beacher Café’s possible closure was sparked by a resident who saw Martineau taking down the sign yesterday.

At this point, Martineau said he is just doing some refurbishment work during the ordered COVID-19 closure, and the taking down of the sign should not be viewed as a permanent closing down of the business being imminent.