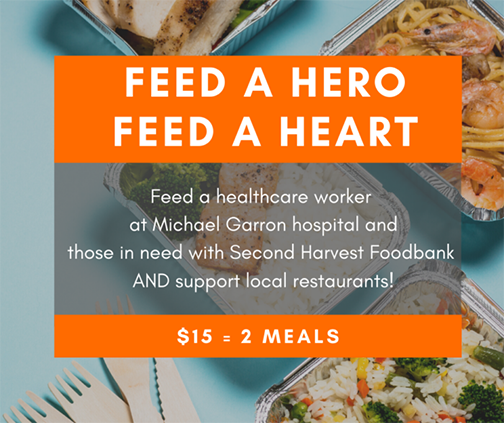 The Richards Group and Afterglow Studio in the Beach have teamed up to start the Feed A Hero Feed A Heart campaign.

A number of groups have started up in Toronto’s east end in order to help those in need during the COVID-19 crisis.

Among them are the Feed A Hero Feed A Heart campaign, and the East Toronto Food Coalition.

The Feed A Hero Feed A Heart campaign is organized by The Richards Group Re/Max Hallmark Realty on Queen Street East in the Beach.

The Richards Group has teamed up with Afterglow Studio in the Beach to support local heroes, local businesses and those needing to use food banks through the campaign.

For more information on the Feed A Hero Feed A Heart campaign, please visit http://insidetorontorealestate.com/feed-a-hero-feed-a-heart/

Also helping those in need through this pandemic is the East Toronto Food Coalition (ETFC).

The grassroots group is organized by local resident Ally Lariviere.

The group is helping deliver emergency hampers with donated food and other items to area families in need. Along with delivering food and items such as diapers, personal hygiene products and baby essentials, the group is also delivering meals that are prepared daily by partner Kitchen24.

The hampers are delivered by volunteer drivers from the community and members of the Bike Brigade group. For now, hampers are being organized at Lariviere’s Queen Street East residence where they are collected and then delivered.

A visit by Beach Metro News late on the afternoon of Tuesday, April 14, observed donations of food and other items, and numerous containers of the Kitchen24 meals, being packed up by a group of five volunteer delivery people to be taken to those who have contacted the ETFC in need of help.

The volunteer delivery people on Tuesday afternoon included four members of Bike Brigade and a driver who came down by car from East York to help out. Bike Brigade is organized by David Shellnut and has mobilized Toronto cyclists to help those in need during the COVID-19 crisis.

Since the ETFC started, Lariviere said it has helped more than 60 area families.

“As we saw the need for food hubs and limitations on accessing food banks, ETFC was formed to create immediate access to essential foods,” Lariviere told Beach Metro News.

Anyone in need of support, or wishing to help volunteer with the ETFC or to donate food or other needed items is asked to send an email to covidfoodcoalition@gmail.com