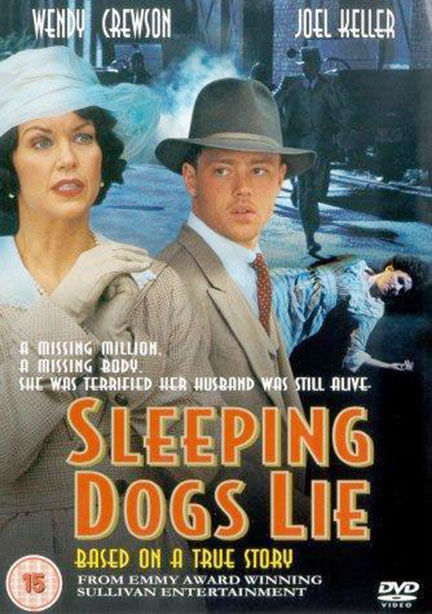 A poster for the 1988 film Sleeping Dogs Lie. Inset, a newspaper photo of John (Jack) Doughty after his arrest in Oregon.

On St. Patrick’s Day which was celebrated this week, everyone is Irish.

One hundred years ago Toronto the Good was a very different place, more “Orange” than “Green”.

Our hockey team may have been called the St. Pat’s, but the city of 1920 was controlled by Protestants and L.O.L. stood for “Loyal Orange Lodge”.

That year the talk of the town was the mysterious disappearance of theatrical magnate Ambrose Small (1866-?).

Suspicions soon fell on his personal secretary John (Jack) Doughty who also seemed to have vanished from his home on Kingswood Road in the Beach.

Ambrose Small’s Irish Catholic grandparents settled in Ontario in the 19th century when Toronto was called “the Belfast of North America”.

Small seemed to have the luck of the Irish. In 1902 he married wealthy Theresa Kormann (1870-1935) and together they owned a network of theatres across Ontario.

On Dec. 1, 1919 they sold all their theatres for a whopping $1.75 million and were given a cheque for one million dollars. The next day Small deposited the cheque and was last seen in his office at the Grand Opera House on Adelaide Street around 5:30 p.m. Then he seemingly vanished without a trace.

No one knows what happened to the 53-year-old business tycoon.

Small had many enemies, a mistress as well as a fondness for chorus girls and gambling on the horses at Woodbine Racetrack.

Katie Daubs has written a fascinating read, The Missing Millionaire: The True Story of Ambrose Small and the City Obsessed with Finding Him.

You can also find Geordie Telfer’s new book, Hogtown Empire: The Disappearance of Ambrose Small.
If you prefer to listen to his entertaining podcasts check out www.hogtownempire.com.

In the 1988 film Sleeping Dogs Lie, Wendy Crewson stars as Mrs. Small, Art Hindle (who grew up in the Beach) plays Ambrose Small and Eric Peterson is John Doughty.

The movie plays up the sensationalism amid the religious tensions of the day. It was filmed on the Scarborough backlot of Sullivan Entertainment.

John Doughty took orders for 18 years as Small’s right-hand man and felt he was owed something for his service. Doughty had even talked about kidnapping his boss. When Doughty could not be found and $105,000 in Victory Bonds was missing from Small’s bank vault, the finger of suspicion pointed to the Kingswood Road resident.

Doughty’s wife had died in 1911 leaving him to raise two young boys. The Doughtys were a close-knit family and John and his sons went to live with his sisters Eliza and Jean in the Beach. Eliza was married to Thomas Lovatt, a carpenter, who built a new house on Kingswood Road close to Queen Street East soon after the area amalgamated with the city in 1909.

Doughty had taken the Victory Bonds the very same day Small disappeared on Dec. 2, 1919. He gave them to his sister who hid the package in the attic of their home.

Police searched all over for the two men, literally digging for clues in yards and gardens. In late 1920 Doughty was found in Oregon and brought back to stand trial for theft of the bonds which were found still hidden in the Kingswood attic. A charge of conspiracy to kidnap was dropped for lack of evidence.

Doughty professed to know nothing about the missing millionaire and claimed to be just holding the bonds for Ambrose Small. He was convicted in 1921 and spent almost five years in the Kingston Pen.

When he returned home to the Beach he operated an auto supply business on the Danforth and lived a quiet life puttering in the same garden on Kingswood Road where police had once been digging for any sign of Small. It is said that for years people would ask their gardening neighbours, “Looking for Ambrose Small?”

Doughty died at 71 in 1949 without giving any clues to what became of Ambrose Small.

Michael Ondaatje gave Ambrose and his mistress Clara new life in his 1987 novel, In the Skin of a Lion. One character, Patrick, is a “searcher” hoping to claim the large reward for finding Small.

A Beacher played a central role in the greatest mystery Toronto has ever seen. We’ll never know if Doughty had anything to do with a murder.

It is likely Ambrose Small was killed that Dec. 2, 1919 at his theatre, possibly in a fight or an attempted kidnapping. What do you think happened?