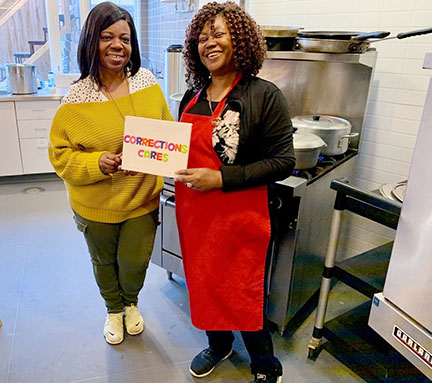 Adele Whaul, left, and Joy Wallace, right, participated in OPESU's Correction Cares day on Family Day recently. They volunteered by cooking a meal for Out Of The Cold in the Beach. Photo by Meredith Omstead.

Probation and Parole Officers Joy Wallace and Adele Whaul spent this year’s Family Day helping the Out Of The Cold (OOTC) volunteers at Beach United Church prepare a meal for more than 50 homeless people.

Wallace and Whaul participated as part of the third annual Corrections Cares day hosted by the Ontario Public Service Employees Union (OPESU) on Monday, Feb. 17. The yearly event allows correctional workers across Ontario to give back to the communities that they serve.

“We assist people with accessing services like Out of the Cold when they come to our office,” said Wallace, who helped organize the Corrections Cares partnership with OOTC in the Beach. Wallace recognized that sometimes when inmates are released from prison, they look to programs like OOTC to provide them with a meal and a place to sleep.

Out of the Cold is a Toronto-based charity that was started by a group of students and ministers from St. Michael’s College School in 1988. The group of founders realized that homeless people were freezing to death on the streets and created an inter-faith organization that responds to food, shelter and clothing needs of Toronto’s homeless population.

Today, OOTC runs out of multiple churches in the Toronto on all nights of the week.

The charity has been in the Beach at St. Aidan’s Anglican Church for more than a decade. It is currently being run out of Beach United Church during renovations at St. Aidan’s. Guests arrive at 3 p.m. on Monday and leave at 8 a.m. on Tuesday. In the interim, they are served a snack, eat dinner, given a bed and have access to clean clothes.

“We treat our guests as if we were hosting them in our house,” explained Margaret Gillespie, co-chair of OOTC in the Beach.

Gillespie has been volunteering with OOTC in the Beach for 11 years, and most of her own family has become involved with the charity. Gillespie and her team pride themselves on always using the freshest ingredients for food and getting food donations from local stores.

“We feed our guests what you’d feed your family,” Gillespie said, “It’s as simple as having salt and pepper shakers instead of packets.”

Wallace and Whaul added to the OOTC in the Beach family by donating their time to make a meal.

Although they don’t live or work in the Beach, they collaborated with the Riverdale Probation and Parole office to compile 30 bags of feminine products and $200 in cash as a donation to the OOTC program.