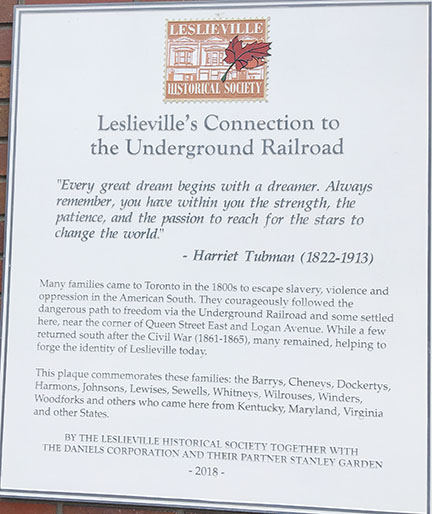 The Leslieville Historical Society put up this plaque at Queen Street East and Logan Avenue to remember the community’s link to the Underground Railroad.

As Black History Month takes place this February, an important part of the Black community’s history in East Toronto was recently remembered.

Many present-day Leslieville residents may be unaware that a lot of African-American families came to Toronto in the 1800s in order to escape slavery in the American South, and they made their way to Canada by the Undergound Railroad.

Leslieville was where a number of them, including Harriet Tubman, arrived and settled near the corner of Queen Street East and Logan Avenue.

Families who are recognized on the plaque include the Barrys, Cheneys, Dockertys, Harmons, Johnsons, Lewises, Sewells, Whitneys, Wilrouses, Winders, and Woodforks.

“I think the significance is that although branches of the Underground Railroad were known in Southwestern Ontario and even parts of downtown Toronto, this community of passengers was not previously recognized,” said Leslieville Historical Society representative Guy Anderson.

Some of those first settlers returned to the United States once the Civil War ended in 1865, but many remained in the Leslieville area.

“The plaque we recently installed on Queen Street, the location essentially chose itself,” said Anderson.

“A few years ago when Daniels Corp was planning their Logan condos they approached us to get our input on the development. At that time we had a few ideas for plaques in the community but hadn’t decided on the theme,” he said.

“But Joanne Doucette, our historian, had traced the backgrounds of some of Leslieville’s earliest settlers and she found that a number of residents who happened to reside in the immediate area near Logan and Queen (then called Kingston Road) had origins in the U.S. South. She was then able to determine that they had made their way north via the Underground Railroad.”

The Ontario Black History Society was also involved to lend support and help promote the unveiling of the plaque in late November of last year.

“Any effort to recognize Black history is important to the city. These narratives often get lost and don’t get told. For people in general, this gives a better understanding of a long Black history,” said Natasha Henry, President of the Ontario Black History Society.

The Government of Canada proclaimed in 1995 to recognize February as Black History Month.