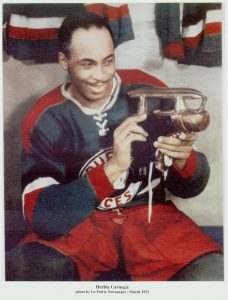 The legacy of hockey legend and Future Aces founder Herb Carnegie will be the topic of a Black History Month presentation slated for Jan. 28 in East York.

The Celebrating Black History in Canada event is set for the S. Walter Stewart Libary on the evening of Tuesday, Jan. 28. Black History Month is celebrated across North America in February.

Carnegie’s presentation (The Herb Carnegie Story: A Daughter’s Reflections on his Inspirational Journey) will be hosted by the East York Historical Society and is co-sponsored by the Toronto Public Library.

Carnegie will talk about her father’s legacy, and there will also be a display.

Herb Carnegie played pro hockey in the 1940s and 1950s in senior leagues in Quebec and Ontario. Because he was black, he was a victim of racism and not given a chance to play in the National Hockey League at that time.

He also established the Future Aces creed for young people which stresses tolerance, diversity and sportsmanship. He was named to the Order of Canada in 2003. He died at the age of 92 in 2012.

Also, two poems by Toronto Poet Laureate George Elliot Clarke will be read to open the presentation. Music will be performed by Lucie Nathan and Rick Pearson.

The event begins at 7 p.m. with refreshments. Carnegie’s presentation starts at 8 p.m.