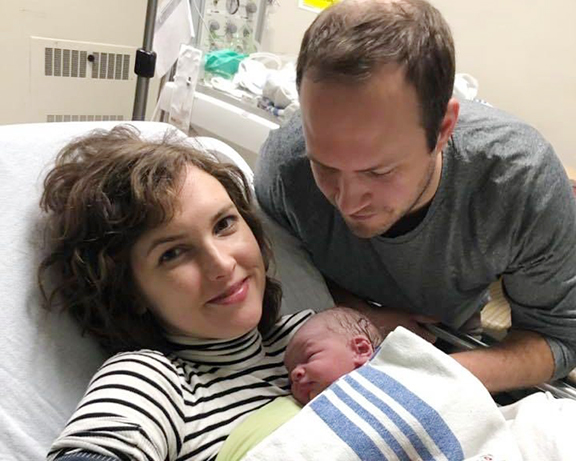 Beaches-East York MP Nathaniel Erskine-Smith, Amy Symington and their son Crawford at Michael Garron Hospital. Crawford arrived a bit earlier than expected on the morning of Dec. 22, and was delivered by Erskine-Smith. Photo: Submitted.

Beaches-East York MP Nathaniel Erskine-Smith and his wife Amy Symington welcomed the birth of their second son a little sooner than they expected on the morning of Sunday, Dec. 22.

The couple were heading towards the Birthing Centre at Michael Garron Hospital when their son Crawford decided he wasn’t waiting any longer.
“We weren’t expecting it to be so fast so we did not go to the ER,” Erskine-Smith told Beach Metro News.

“We entered through the Coxwell entrance and were making our way to the Birthing Centre and the baby came.”

Amy was able to sit down on a bench in an empty hallway, and Erskine-Smith himself delivered their son.

“Amy did all the hard work. I just had to make sure I didn’t drop him,” Erskine-Smith said of the delivery.

“The ER was very quick but he (Crawford) was a little faster. I was glad they were right there after he was born as they took him right away and made sure everything was okay and got Amy up into a bed.”

He admitted it was an experience he was not expecting, though perhaps he should have noted a case of foreshadowing when it came to stories of MPs delivering babies.

“I had done this show Political Blind Date with a Conservative colleague and he told me the story of how he delivered his baby,” said Erskine-Smith. “But his wife was a doctor and talked him through it. I remembered thinking at the time that must have been terrifying, but you do what you have to do in the moment.”

He said Amy, Crawford and their three-year-old son Mack are all happy, healthy and doing well.