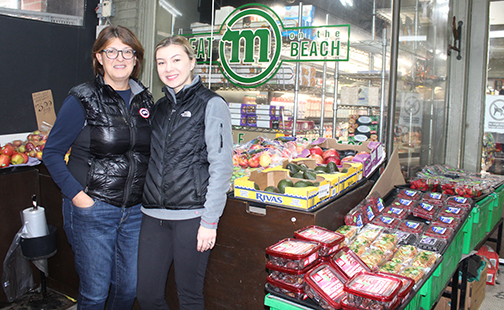 Anna Skalko, left, and her daughter Martina Monte in front of Meat on the Beach during the store's last day of business on Friday, Jan. 3. Photo by Alan Shackleton.

Local gourmet grocery store Meat on the Beach has closed its doors after 24 years in business along Queen Street East.

The store’s last day of business was on Friday, Jan. 3.

Owner Anna Skalko said there were a number of reasons why she decided to close, but wanted to make it clear that the cost of rent was not one of them. “The rent was not a deciding factor,” she said.

“I don’t know what to say. Every season has an end and small business is getting tougher and tougher,” said Skalko in an interview with Beach Metro News on Jan. 3.

She said that the “economic climate is tough” for all small businesses right now and competition from big box retail outlets was taking a toll.

Meat on the Beach has been in business in the community for almost a quarter of a century selling groceries, fresh fruit and vegetables, and fresh meats at its butcher counter.

The first location was at 1965 Queen St. E., just east of Kenilworth Avenue, where they operated for eight years.

Eventually the business outgrew that space and moved to the current location at 1860 Queen St. E. (just west of Woodbine Avenue) 16 years ago.

Skalko added that this fall’s closure of Queen Street East at Kingston Road for streetcar track work just made doing business even harder in the months of September, October and November.

“The road closure was what put the final nail in the coffin,” she said.

Skalko and her daughter Martina Monte wanted to thank Meat on the Beach’s many loyal customers for their support over the decades.

“I think they are the greatest customers, and so loyal,” said Skalko. “We’ve been serving the community for all these years and the staff is like family. Everybody’s been so wonderful. Some of the customers were crying when they heard we’re closing the store.”

“The customers were so sad to hear it,” said Monte.

Customer Nina said she will miss Meat on the Beach.

“There was nothing else like them in the Beach. They always had such good meat,” she said. “I’m going to really miss this store.”

Customer Jackie also said she would be “sad to see them go.”

“My family have been regulars since we moved here five years ago,” she said. “The staff is super friendly and they had such a great selection.”

“This came as a total surprise. There was no warning,” added Jackie. “It’s been a tough start to 2020 around here with The Tulip also closing.”

(For more on the closing of The Tulip restaurant on Queen Street East just west of Coxwell Avenue, see our story at https://beachmetro.com/2020/01/02/the-tulip-restaurant-on-queen-street-east-announces-closure-due-to-changing-lease-agreement/ )

Though Meat on the Beach is closing, Skalko emphasized that she is not retiring.

“It’s a sad day, but it’s time to do something else. We are not retiring. I have no idea what the future holds. I will have to think about my next venture,” she said.

Skalko does not know what if any future plans there might be for the store site.