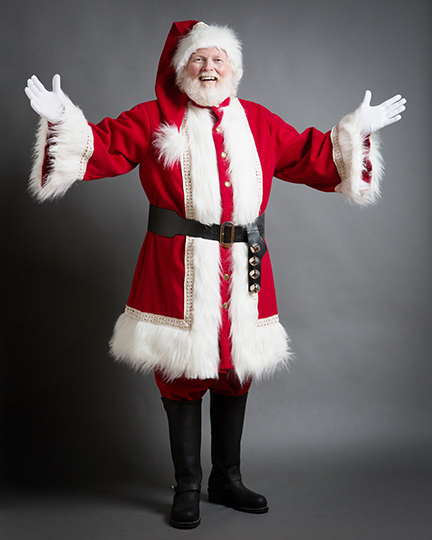 As he dons his iconic red and white suit and hat, Paul Dick transforms from Corpus Christi Catholic Church choir director to Santa Claus. With a thick natural white beard and jovial spirit, he embodies the spirit of Christmas.

Dick first started acting as Santa when his friend, actor Michael Hanrahan, saw him perform as Santa live in Christmas concerts while he was teaching at Notre Dame High School. Hanrahan suggested Dick get himself an agent to continue working as Santa.

“It kind of percolated in my mind a bit. I’ve been singing Christmas music since I was 10. I went to the choir school and we were always concerting so the music of Christmas has always been in my DNA,” said Dick.

He said that his love for the Christmas season with its music and magic propelled him toward adopting the Santa persona.

“All of a sudden I looked in the mirror one day and realized that Santa was looking back at me,” he said.

Dick fondly remembers sitting in a restaurant one day when a little girl thought he was Santa because he had a red sweatshirt on. After that event, he began acting and going to casting calls, and secured his first job.

“I thought ‘I guess I can do this.’ I’d never acted a day in my life up to that point, and I was in my 50s. I feel really blessed and I’m lucky to be working,” said Dick.

Dick has starred as Santa in commercials in the past, including one for The Source, and Pearson Airport.

This year, Dick will be making appearances in three commercials: for Home Hardware, Dairy Farmers of Canada, and Crest, a commercial that is international and has a potential viewing audience of 400 million.

He also shot a movie last year in Ottawa called The Truth About Christmas, that premiered on CBC on Dec. 9.

Dick said that when he’s shooting a movie or commercial, he never takes a break from being Santa.

“Once you put on the costume, there are bigger responsibilities. There’s a responsibility to the public. Everybody, young or old, wants to come over for a picture with Santa when they see you,” he said.

“It’s a wonderful career and it’s wonderful being Santa, I can’t think of a better job than a job that makes people smile. We need so much more of that now. And you need someone who just brings people together to have a good time,” he said.

For this Christmas season, Dick encourages people to look past just finding the perfect gift for family and friends.

“I think people need to remember that this time of year is all about being together and enjoying one another’s company, and sharing the love.”

To watch Dick as Santa in Crest’s commercial, visit https://www.youtube.com/watch?v=wCj7876J3fw&feature=youtu.be.

To see some of Dick’s past work including a snippet of him in The Truth About Christmas, visit https://www.youtube.com/watch?v=gyj-NwydZ-U&feature=youtu.be.