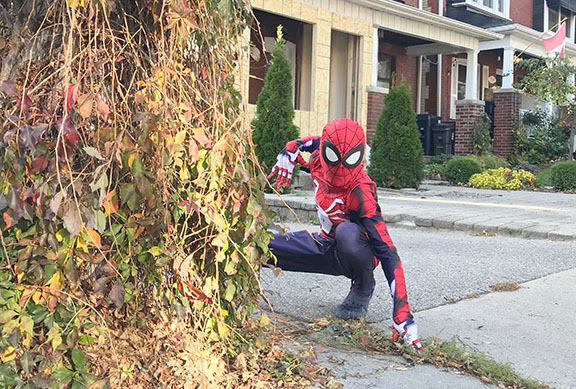 Decked out in his Spider-Man gear, Kenilworth Avenue superhero “Mr. Day” is on patrol helping to keep the neighbourhood safe. Photo by Surina Nath.

By day, he’s a boy in Grade 5 who loves wrestling, skateboarding, and watching Ferris Bueller’s Day Off. By night, when he puts on his Spider-Man suit, he becomes the Beach’s very own superhero — going by the name of Mr. Day.

You may notice him running around Kenilworth Avenue, greeting children and neighbours, taking action when he senses danger.

This Beach superhero is no average nine year old, he uses parkour skills to climb tall ledges and trees, scanning these Toronto streets, making sure the community stays safe.

“He’s a delight,” said neighbour Joan Paterson. “Who needs neighbourhood watch when you can have Spider-Man? He runs up and down the street doing cartwheels and observing the ‘comings and goings’ of the street activity.”

“He came to my door to tell me that the back hatch of my car was open as a precaution for possible theft,” she said. “Again delightful. He’s very polite.”

From helping others when they’re injured, to playing games like hide-and-seek with children on his street, this superhero strives to keep the peace by any means.

Since the age of four Mr. Day wanted to be out protecting the neighbourhood, running outside with the permission of his grandma.

“I kept going until I was able to patrol the streets by myself,” he said. “And I’m going to keep going for as long as I can.”

While on patrol a year or two ago, Mr. Day saw a group of people pouring liquids down a sewer grate.

Realizing what was happening, he knew he couldn’t approach them alone and told an adult immediately— he knew something needed to be done.

The neighbourhood superhero feels passionately about the environment and reducing pollution in the area.

He helps out by speaking out about littering and picking up garbage at Woodbine Beach on top of his busy schedule of keeping us free from harm.

Turning 10 on Dec. 30, Mr. Day aspires to be a police officer in the future. “Helping people is something I really like to do,” he explained.

Working with the law is a big part of this hero’s motto, making way for a new definition of what it means to be a superhero.

Mr. Day is an example of just why our community is such a special place, and he leaves the Beach with just one message: “Always be kind,” he said.