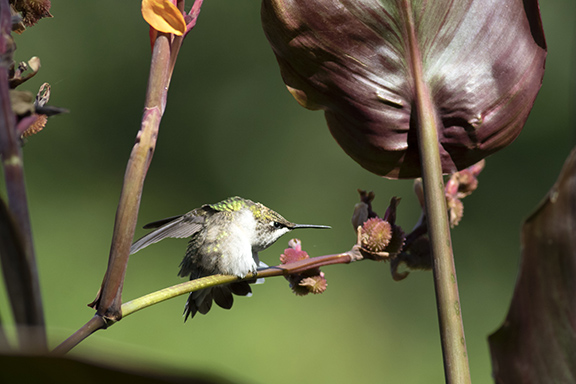 Ann Brokelman recently captured this image of a hummingbird feeding.

Well, summer sure left us in a hurry this year! It was the first of October, it was cool, and the winds were blowing something fierce.

As an optimist, I try to remember that, while I may not like all types of weather, there will always be an animal that will take advantage of the different conditions.

Strong winds usually mean there will be a lot of birds of prey, such as hawks, harriers, turkey vultures, and eagles, taking to the air. While the wind is certainly harder for them to fly into, it also provides them ideal soaring and gliding conditions when they fly with it.

This day, however, didn’t bring any of the birds. A few monarch butterflies were heading south, but other than that there was only blue skies and the occasional cloud.

I then tried to look for some goldfinch and warblers. It is getting late in the season for warblers, but you never know what may appear. To my surprise, I came across four ruby-throated hummingbirds. It turns out there are a plethora of flowers around, from which they can still get nectar, and the little insects they like to eat haven’t all disappeared.

The forehead on the first hummingbird I saw was covered in white powder nectar, so he seemed to be eating well. The behaviour I saw in the next hour was outstanding. In all the years I’ve had hummingbirds coming to my feeders or hovering around flowers, I’d never seen them really stop and rest. Normally hummingbirds are moving so fast that it is hard to catch a photo of them at all.

These ones, luckily, were feeding on the aster flowers around the cantanna lillies. After feeding, one of them landed on one of the lillie’s branches to give me a show.

First, he looked around before sticking his tongue out to catch a small insect. He then used its tiny foot to scratch his head, (imagine the size of the foot!), first one side then the next. The long beak would then go into the front feathers and preen each feather.

I’ve learned that this helps with waterproofing the feathers, which must be important to a bird that doesn’t weigh much more than 3.1 grams.

Then, this beautiful little bird began to stretch. His tail feathers would flare out on both sides, he lifted his wings up and rotated them, and his head would rhythmically extend and bob.

Before moving on, the hummingbird cleaned its beak on a nearby branch. This was such a unique sighting it still gives me goosebumps to think about.