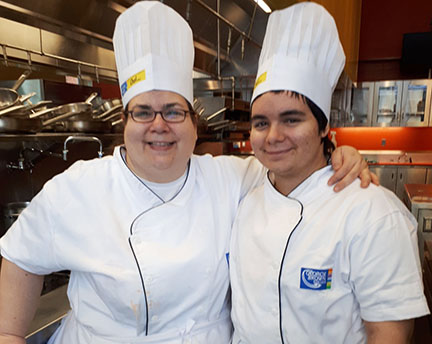 There is an intrinsic link between food and love – indeed, food that has been made with love somehow always tastes better.

For Monica Kelly, local chef and owner of Miss Mo’s Vegan Kitchen, love is at the core of everything she makes and when it comes to food – in particular, vegan food – her passion for the subject is undeniable.

Growing up with an Acadian mother who shared both her love of good food and a nurturing nature, Kelly learned early on just how powerful the act of cooking and feeding those you love really is.

When her mother passed away in 2017, she became more determined than ever to realise their “pipe dream” of opening a family-run, comfort food café, something they’d both talked about over the years.

Despite being raised in a household of meat eaters, Kelly made the decision over nine years ago to become fully vegan and she’s never looked back.

“While my choice was largely because I’m a huge animal lover and empath, the difference in how I felt after becoming vegan was amazing,” she said.

“I felt like a new person – the brain fog I’d been experiencing disappeared, I felt lighter and had so much more energy.”

And, while she fully respects everyone’s choice to eat what they want, showing people just how amazing vegan food can be was one of the driving forces behind her catering business.

As well as being vegan, all Kelly’s dishes are gluten and corn free, a decision that was prompted by the discovery four years ago that her son Axel, now 20 and also involved in the business, had a serious intolerance to both substances.

Not only did a gluten-free (and subsequently corn-free) diet make a huge difference to her son’s health, but it forced Kelly to become even more creative in the kitchen, a challenge which, like most other things in her life, she took in her stride.

For Kelly though, cooking for friends and family wasn’t enough – she wanted to share her food on a larger scale. Without the means to open her own place, the ever-resourceful chef did what she could to get her food out there, posting her creations on Facebook, offering her personal chef services and sometimes even inviting folk to come on over to her place to grab some freshly baked vegan cookies.

She also recognized the need to learn as much as she could about the business side of things and took several business and food enterprise courses, in addition to joining networking groups such as Canadian Women in Food.

With two successful pop-up restaurant events now under her belt – one at the Bain Co-op and the other at the Ralph Thornton Centre – Kelly has her sights firmly set on growing the business to the point where she realizes that dream of having a small café, while also staying true to her love of the east end.

“I grew up in this area, and it’s important to me that I support other local businesses and causes I believe in,” she said.

For Kelly this means buying all her supplies from local vendors, donating 10 per cent of her profits to animal charities and, as the proud mom of her transgender son, being an advocate for the LBGTQ+ community – when she eventually opens her café it will be a gender-neutral, safe space where everyone feels welcome.

“I truly believe in acceptance and inclusivity, and that, through food, we can all find a common ground. At the end of the day, it’s just about love,” Kelly said.

To learn more about Miss Mo’s Vegan Kitchen and when her next pop-up will be happening, go to http://www.missmosvegankitchen.ca/