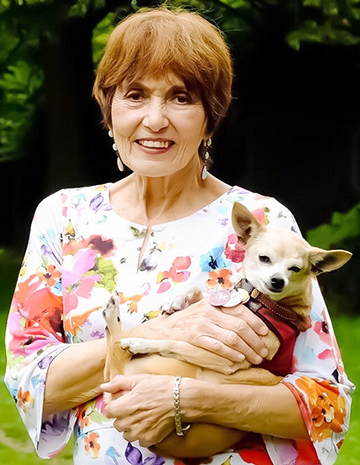 Elizabeth Abbott is running for the Animal Protection Party in Toronto-Danforth in this month's federal election.

I am a writer and historian focused on social justice issues, and a retired academic. Twenty-eight years ago, an epiphany about animals transformed me from a carnivorous dog and cat-lover into a plant-based vegan and I took my first steps toward animal advocacy. I am also a grandmother so terrified by the catastrophic future of the world facing my granddaughters that I am again running for the Animal Protection Party, the only party totally focused on the intertwined animal and environmental protection, without which the world will continue to lurch forward into disaster.
My candidacy is the best way I know to promote our policies of political compassion in Toronto–Danforth and in Canada and indeed, the world. I also strive to use it to hold my fellow candidates to higher standards about animals than their current policies now describe.

I am deeply disturbed about the increase in incidents involving gunfire, and I support a national ban on semi-automatic assault rifles and handguns, the weapons most commonly used in criminal shootings.
I abhor the presence of weapons in a civilian population and have never yet heard a compelling argument in favour of tolerating them. But bans are not the stand-alone solution, and I am encouraged that there are ongoing studies about new ways of understanding the issue.
I will support whatever new proposals seem likely to deal with the problem at its roots, including the manufacture, importation and smuggling of weaponry. I will also work to promote initiatives to combat the gun-loving culture that feasts on abuse and violence.

Toronto—Danforth is a progressive riding of about 106,000, a fifth of them children, and my goal is to work feverishly to save them from the nightmarish consequences of climate collapse including scorching heat waves, flooding, heavy rain and hail, a crisis in availability of potable water, food insecurity and widespread hunger, health implications as new pathogens and pests travel north, more frequent and violent forest fires (Canada`s forests are among the world`s most vulnerable), the loss of biodiversity as our flora and fauna succumb to new conditions, the failure of traditional industries such as agriculture, forestry, tourism and countless others, and mass immigration from areas already rendered unliveable.
Much of this has already begun and we need to focus on measures to stave off far worse manifestations of climate change. Toronto-Danforth residents understand the urgency, and the Animal Protection Party urges them to trust us with their votes.

The most crucial issues stem from the catastrophic climate breakdown that is already harming every living being, human and animal.
In this existential emergency, we must remove all tax incentives and subsidies from animal agriculture, a primary cause of climate change, and assist farms to transition to a plant-based economy and agriculture, implement aggressive carbon pricing to encourage adoption of conservation measures, impose tariffs on goods from nations that lack it, give generous subsidies to develop and adopt alternative energy sources, end subsidies to the oil and gas sectors, and halt the expansion and construction of new pipelines.
What the private sector cannot or will not do, the public sector must. And the APP would also engage in Indigenous-led conciliation that would seek not merely restorative justice but would welcome being guided by traditional knowledge about climate change including in environmental assessments, and wildlife and plants.