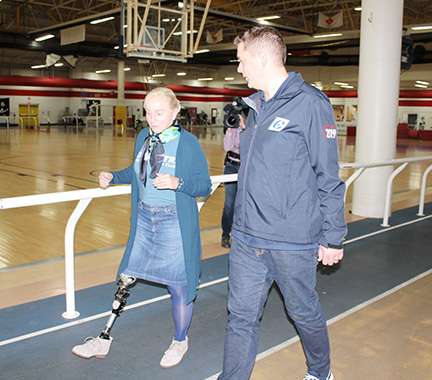 Scheer did not speak at the event which was a “photo opportunity only” event as he walked the track in Variety Village’s fieldhouse and looked at equipment with Smith for approximately half an hour. He also stopped to speak with a couple other people in the field house as he walked with Smith.

After Scheer left, Smith spoke with Beach Metro News about the visit and why she had asked her party leader to visit the facility on Danforth Avenue just east of Birchmount Road, which is especially important to her as she is an amputee.

“I am a member of Variety Village, and have been since 2014. I trained here for the Paralympics, and thought it was important to show him what they do here,” she said.

Variety Village has been helping people with disabilities and those who face developmental barriers to achieve life goals since 1946. The southwest Scarborough facility welcomes people of all abilities at its family-friendly sports, fitness and lifestyle centre.

Smith served in the Canadian Armed Forces for 22 years, and was the first and only woman in Canadian history to have served in a war zone with a prosthetic leg.

She was the victim of a tragic car accident in 2006 which took the life of her eight-month old son and resulted in the amputation of her right leg. She had served as a combat engineer with the Canadian Armed Forces in Afghanistan in 2002, and did so again in 2008 with her prosthetic leg.

Smith also represented Canada as a para-athlete at the World Championships in 2010 in Hungary and again in Beijing in 2011.

Earlier on Monday, Scheer had announced that if elected the Conservatives would expand access to tax credits for disabled Canadians. That policy was announced at the Abilities Centre in Whitby in the morning, and Scheer visited with Smith at Variety Village in the afternoon for photos.

Among other expansions of the definition of disability, the Conservative Party proposal would recognize those with Type 1 diabetes as being eligible for the tax credit

Smith praised the proposed plan to expand the definition of disability so more people can get help.

“He made a huge announcement to include 35,000 more Canadians to qualify for the tax break,” she said of Scheer.

In this fall’s federal election, Smith will be challenging Allen Atkinson, of the None of the Above Party; incumbent Bill Blair of the Liberal Party; Amanda Cain, of the Green Party; Italo Eratosene, of the People’s Party of Canada; Simon Luisi, of the Animal Protection Party of Canada; and Keith McCrady, of the NDP; for the Scarborough Southwest seat.