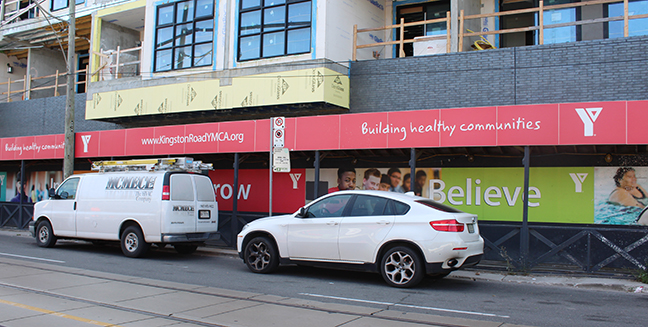 Work continues on the YMCA on Kingston Road earlier this week. The facility will be re-named The Steve and Sally Stavro Family YMCA, said an announcement from the YMCA of Greater Toronto which was released Thursday, Sept. 26, morning. Photo by Alan Shackleton.

The Kingston Road YMCA will be re-named The Steve and Sally Stavro Family YMCA.

The YMCA of Greater Toronto made the announcement on the morning of Thursday, Sept. 26.

“The Stavro family’s deep connection to the east end Toronto community and their support for the YMCA will see the Kingston Road YMCA centre of community re-named The Steve and Sally Stavro Family YMCA,” said a release from the YMCA of Greater Toronto.

The YMCA received a $1 million donation from the Steve & Sally Stavro Family Foundation in support of the new centre on Kingston Road, between Beech and Balsam avenues, which is set to open next year. In addition, the renaming was supported with a $2 million gift from an anonymous donor and numerous contributions from additional donors, said the YMCA announcement.

“Steve grew up in this area and had a life-long love for the community and organizations like the Y that help people live better lives and contribute so much to the fabric of the city. He would be honoured to have this wonderful new centre bear the Stavro name, as is the rest of our family,” said his wife, Sally Stavro.

A passionate sportsman, entrepreneur and philanthropist, Steve Stavro arrived in Toronto in 1932 when his family came to Canada and settled in the city’s east end, said the YMCA announcement.

He went from helping out at his father’s small meat market at Queen Street East and Coxwell Avenue to building the iconic Knob Hill Farms chain of food terminal grocery stores. The founder of the Toronto City Soccer Club, Stavro later became controlling owner of the Toronto Maple Leafs and Toronto Raptors, bringing the two franchises together with the creation of Maple Leaf Sports and Entertainment and overseeing construction of the Air Canada Centre (now Scotiabank Arena).

“Steve Stavro and his family embody the values of commitment to community and giving back,” said Medhat Mahdy, President & CEO of the YMCA of Greater Toronto.

“He and Sally have been dedicated to ensuring the health and vibrancy of the east end, and tremendously supportive of those who need assistance and the organizations who provide it. That dedication and their financial generosity make naming our new centre of community in their honour a perfect fit.”

The Steve and Sally Stavro Family YMCA centre of community will span 60,000 square feet on the south side of Kingston Road which was the site of a previous YMCA location that served the community. Amenities of the new centre will include two swimming pools – a fully accessible four-lane, 25-metre lap pool and a fitness and therapeutic pool – as well as a whirlpool, a conditioning/weight room, fitness studios, a full-size gymnasium and a community space.

Along with the health and fitness programs, the YMCA will offer a range of social and educational programming tailored to meet the diverse needs of the community, for students, seniors and new Canadians.

The opening of The Steve and Sally Stavro Family YMCA will aim to bring everyone in the community and surrounding areas the resources they need to reach their potential and achieve their dreams, the announcement said.

East end residents are invited to sign up for newsletter updates about the project at kingstonroad.ymcagta.org.

The YMCA of Greater Toronto is actively fundraising for the development of The Steve and Sally Stavro Family YMCA and community donations remain welcome, the announcement said.

For more on what the new YMCA on Kingston Road will offer and a sneak peak at how construction is going, see our Beach Metro News story at: https://beachmetro.com/2019/05/10/new-kingston-road-ymca-starting-to-take-shape-in-advance-of-2020-opening/