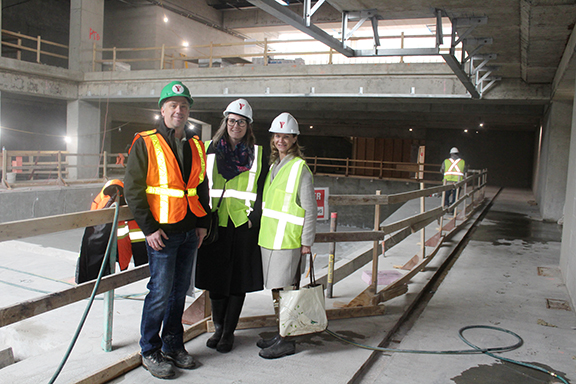 From left, Alex Versluis, Virginia Dimoglou, and Nora Gorman recently took the Beach Metro News on a tour of the Kingston Road YMCA for an update on how construction is progressing. Here they are standing beside what will be one of the facility's pools. Photo by Alan Shackleton

The Kingston Road YMCA is shaping up to be a fitness and social hub for the east Toronto community, and Beach Metro News was able to take an exclusive tour of the site recently.

The 60,000-square-foot facility on the south side of Kingston Road between Balsam and Beech avenues has been years in the making, but the construction is now at a point where a clear picture can be imagined of what it is going to look like when it is finished.

There will be two pools, a whirlpool, conditioning/weight room, multipurpose fitness studios and a full-size gymnasium.

Input from area residents played a big role in how Kingston Road YMCA would look and the programs it would offer, said Virginia Dimoglou, General Manager.

“We were very engaged with the community, and swimming and learn-to-swim was a key thing being asked for, along with a gym,” she said during the tour.

The new Kingston Road YMCA is replacing the former Y at the site, which was much smaller and did not have a pool.

The new one will have three of them: a four-lane, 25-metre lap pool, with a ramp entrance making it fully accessible; a fitness and therapeutic pool with a movable floor to control the depth; and a whirlpool on the pool deck.

Dimoglou said having the whirlpool on the deck was one of the features community members asked for during consultations.

The new Kingston Road YMCA has joined with condo developer Mitchell and Associates for the building of the new facility. The condo portion, known as The Beech House, will take the top five floors of the six-storey building, with 95 units featuring terraced balconies on the south side.

The YMCA will have fitness/weight room and multipurpose rooms at ground level, with the pools and the gym one floor below. The building’s other underground floors will have parking for both condo residents and Y users.

A ground breaking to start construction took place in October of 2015, and the facility is expected to be completed and opening its doors in 2020.

There will be lots of windows fronting Kingston Road to let the light in for users and to make the facility open and inviting to the community, said Dimoglou.

The ground floor will also overlook the pools and gym, which will mean there will be lots to see and do at the Y.

“It will be fun to see all the people using and enjoying the space,” said Alex Versluis, Senior Vice President, Property Management and Development for the YMCA of Greater Toronto.

From a building standpoint, the facility will also be environmentally friendly as it meets LED Gold Standards, he said.

The multipurpose studios will be exactly as billed, as they have been built to be flexible and adaptive to the community’s needs.

“We have a commitment and focus on functional fitness,” said Versluis.

There will also be space close to the fitness areas for childminding so caregivers can use the facilities while remaining close to their children.

Dimoglou, who lives in the community, knows firsthand that excitement is building as the facility moves closer to completion.

“I know people are getting excited about it,” she said.

And it will be a place for all ages, from toddlers learning to swim to seniors meeting for social or fitness sessions, to teens and adult groups playing basketball, volleyball and other gym sports.

“There’s space for kids to learn sports and for adults to play sports,” said Dimoglou.

For more information on the Kingston Road YMCA, including the opportunity to sign up for a newsletter, please visit https://kingstonroad.ymcagta.org