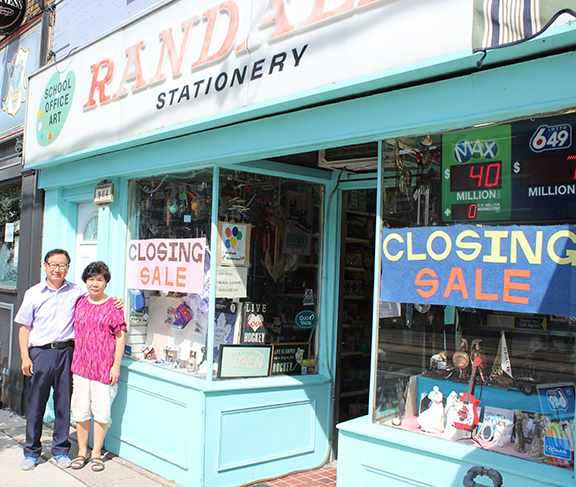 JinWoo Lee and his wife HaeKyung Shin have been running Randall’s Stationery on Kingston Road since 2003. They bought the business from the Randall family who had run the store since the 1930s. The couple is now retiring and the store will close on Sept. 10. Photo by Alan Shackleton.

Randall’s Stationery on Kingston Road will close its doors in early September, ending more than 80 years of business for the store in the community.

Founded in 1934 by the Randall family, the store has been operated since 2003 by JinWoo Lee and HaeKyung Shin who bought it from the family at that time.

The couple, originally from Korea, are now holding the closing sale for Randall’s and are also inviting the community to come for tea on the final day, which will be Tuesday, Sept. 10.

In a letter to their customers, the couple thanked the community for its support over the 16 years they have operated the store.

They are planning to retire and have sold the property, which includes the store and the apartment they lived in above the store.

“As of September 10th, we will be closing Randall’s Stationery for our retirement,” they said in the letter. “For the past 16 years, we are grateful for the kindness and generosity of our neighbours and also their patience for our English.

“We started our new life in Canada with Randall’s and we had an amazing run. Both of our children grew up in the neighbourhood and their involvement in the community during their time at Malvern was special. As for us, the interactions with the community through events like Kingston Village Festival is something that we hold dear and we will never forget. We wanted to keep the history and memories of Randall’s Stationery, but we feel sad the we couldn’t carry on the legacy.

“We thank God for the opportunity to take over the store from Mr. Randall and it makes us sad that we have to leave the store behind us.”

Lee said he does not know what will happen to the iconic Randall’s sign which has fronted the store at 964 Kingston Rd. just west of Scarborough Road for decades.

Further adding to the community’s concern and interest in the closing of Randall’s is the fact that the location has been awarded a licence to be a cannabis retail outlet by the Alcohol and Gaming Commission of Ontario in its recent lottery.

The ownership of the licence is under the name of Najla Guthrie, according to the AGCO’s website.

Lee said he did not have any information on the new property owners or on any plans for a cannabis retail outlet.

There has been a wide variety of opinions on whether the location is right for a cannabis retail outlet, especially given its location which is close to a number of high schools.

Also adding to the controversy and confusion over the cannabis retail licence for the Randall’s site is its proximity to the Beaches Montessori School which is four doors west along Kingston Road and less than 150 metres away, which is the exclusion distance the Ministry of Education has said cannabis stores must be from schools.

Julie Mitchell and Leigh Anne Jacques are the owners of the Beaches Montessori School and they say they have been unable to get any clarification from the ministry regarding preschools.

They and many of the parents of students at Beaches Montessori School had assumed preschools and daycares would also fall within the 150-metre exclusion zone given that they are licensed by the Ministry of Education.

“At first when we heard about the cannabis licence, we thought it was a mistake and there would be a quick fix,” said Jacques. “We contacted the ministry and they said they would get back to us, and then we’ve heard nothing.”

Beaches Montessori School has 62 children attending between the ages of 18 months to five years in four classrooms. They follow a regular school year schedule with classes from September to June, and a daycare in the summer.

“There’s a lot of misinformation out there right now, and we’d like it to be explained,” said Mitchell.

Among their concerns are crowding on the sidewalk at school dismissal times, given that many cannabis stores have seen long lineups of customers.

Beaches-East York MPP Rima Berns-McGown said the Ministry of Education has made a big mistake by not having clear guidelines regarding the distance between cannabis stores and preschools and daycares.

“The issue is not are there going to be weed shops, the issue is how far from schools will they be,” she said in an interview with Beach Metro News.

“They don’t know what they’re doing. They seem like they care more about six year olds than five year olds,” Berns-McGown said. “This is a Ministry of Education issue and they screwed up.”

She said the fact that Ministry of Education had yet to call back Beach Montessori on the issue was “shameful.”

The Randall’s site is not the only one in the area to be awarded a cannabis licence in last month’s AGCO lottery.

Another lottery winner was Jason Krulicki, at 2480-2490 Gerrard St. E., on the northeast corner of Victoria Park Avenue. That address was the source of much controversy when it was suggested as the Ontario Cannabis Store’s first location in April of 2018.