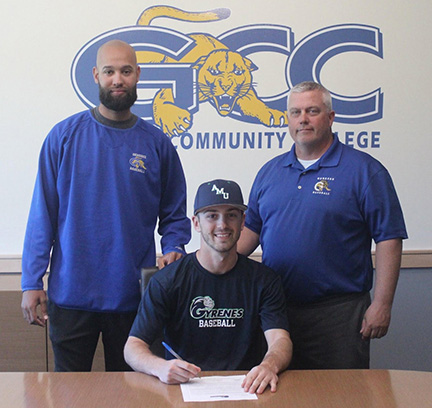 When winter comes, and snow covers the ground, Beach resident and Malvern Collegiate Institute graduate Jakob MacLeod won’t be bothered at all. He will be miles away living his dream of college baseball at Ave Maria University in Florida.

MacLeod couldn’t be happier with starting the program on scholarship in September.

“Two of the teams were ranked in the top 10 of the NAIA, and those two teams had a couple of kids drafted into MLB (Major League Baseball),” said MacLeod.

By the end of October, he expects to be working out every day, with a baseball practice every other day, and four to five games a week.

“Life in Florida is actually amazing and I’m going to love it even more when I can wake up at 5 am for our team workouts in November and I can wear shorts and a t-shirt while walking to the gym,” he quipped.

MacLeod first stepped onto the diamond at just six years old. He started with the East York Baseball Association (EYBA), where he played house league. At age nine, he moved up to a rep program, his first experience in competitive baseball.

He refers to the EYBA as a “second home”, and praises its importance. “If I didn’t play on the main field at Stan Wadlow (Park), I wouldn’t be able to take a ground ball as well as I do now.”

For the past two years, MacLeod has played both pitcher and fielder for Genesee Community College in Batavia, New York. He said that he’d never played so much before, as the season there is shorter because of the lake effect in the winter.

“Our season (in Batavia) is condensed from March to May by playing two games every Sunday, Tuesday, Thursday, and Saturday. I have Genesee to thank for taking me to the next level.”

Among those who contributed to Jakob’s growth as a baseball player are his parents, and his EYBA coach Andrew Green.

“He (Andrew) taught me how to not overthink too much, and that you can only make so much go your way until you throw that first pitch or hit the ball that first time in the game. After that it’s just baseball doing its own thing and if something happens to go your way, then you’re lucky.”