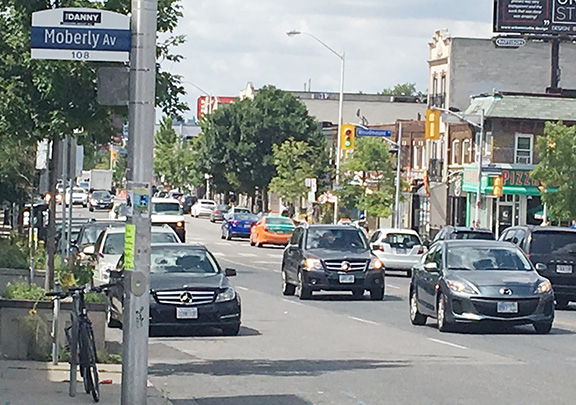 Danforth Avenue between Woodmount and Woodbine avenues will be the site of the 8 80 Danforth pop-up focusing on pedestrian safety this Friday and Saturday.

A Vision Zero pop-up project called 8 80 Streets Danforth will be set up on Danforth Avenue from Woodbine to Woodmount avenues this weekend.

Taking place from Friday, Aug. 23 to Saturday, Aug. 24, the project will be debuted by 8 80 Cities and local partners from the Danforth Mosaic BIA and the Danforth East Community Association, as well as Earth Day Canada.

“We’re building kind of a prototype of a street that exemplifies the city’s (Toronto’s) vision to get pedestrian fatalities down to zero. We want to highlight, in a short amount of time with simple materials, how you can build a better street for people,” said 8 80 Cities executive director Amanda O’Rourke.

O’Rourke said that work on the street makeover will start on Aug. 22 with the help of about 70 volunteers.

“Our long-term goal is to accelerate action on creating safer streets for vulnerable road users, not just for the Danforth but for all streets in Toronto,” said O’Rourke.

“The key element that you will see in the space is expanded pedestrian space,” she said, which will be made possible by cutting car traffic lanes from four to two.

There will also be physically separated bike lanes, improved seating, additional lighting, and a street mural that will be painted at Danforth and Moberly avenues.

“We’re also installing two parklets, which are basically small parks, that will be expanding the lanes we’re taking over from car space and transforming it into a more human-centric space,” said O’Rourke.

The pop-up will also showcase local artists, and there will be music and games as well.

Beaches-East York Councillor Brad Bradford said he gives full credit to former Councillor Mary-Margaret McMahon for championing the bringing of a pop-up like this to the east end, and that he went to get special approval from Toronto-East York Community Council to make this happen.

“The pop-up is an incredible idea. It’s a great way to help people really see and feel a different way of designing our streets. The goal here is to move forward the conversation about road safety, and making us think differently about how we can design our city for people of all ages and abilities,” said Bradford.

O’Rourke said that initiatives like this elevate the conversation about saving lives and implementing life-saving infrastructure in Toronto.

“But these interventions also have a lot of other benefits. They’re good for local business, and they’re overall more fun places to be, and can be more enjoyable for people in the neighbourhood and across Toronto to enjoy the streets as a public space,” said O’Rourke.

Bradford said that road safety is one of his top priorities as a councillor.

“We’re in the middle of this big conversation as a city about how we do road safety better with initiatives like Vision Zero 2.0. I want this project to bring attention to that conversation and contribute solutions,” he said.

Bradford also said that there are more ways to improve road safety not only on the Danforth but on other arterials across the city.

“This pop-up gives us the chance to test something out, get people excited for different ways of thinking about street design, and most importantly have some fun while talking about these important topics,” he said.

The project was funded through a private donor whose friend was one of the 46 pedestrian deaths in Toronto in 2018.

Along with 8 80 Streets Danforth, two other pop-up projects will happen in the city in the coming months.

Bradford said that 8 80 Cities will be gathering data through an online survey to determine how the pop-up impacts peoples’ experiences of that section of the Danforth and how the road is used.

“I’m proud to welcome this event — the first of its kind in Canada — in our Danforth East community,” said Bradford.