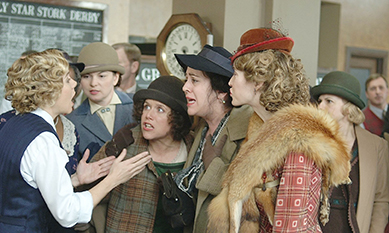 Megan Follows plays the role of a fictional reporter in the 2002 TV-movie The Stork Derby, which was inspired by Charles Millar’s will. The 1936 archive photo in the inset shows a cinder spreader in front of the house on Scarborough Road that was once home to Balmy Beach’s Millar.

In May we welcomed the royal baby Archie (a good ‘heir’ day) and celebrated Mother’s Day. Back in 1926 a prominent lawyer who lived in Balmy Beach didn’t show much respect for motherhood.

In his will, Charles Vance Millar left a fortune “to the mother who has since my death given birth in Toronto to the greatest number of children” within 10 years.

Balmy Beachers enjoy a good joke, but Millar carried things too far. In life and in death he was an eccentric prankster.

When he keeled over from a heart attack on Halloween night in 1926, he left tricks and treats for the upright citizens of Toronto the Good, including beer and racetrack shares for ministers opposed to drinking and gambling.

The most controversial clause in his will caused a sensation in the depths of the Great Depression and led to the “Great Toronto Stork Derby” with families competing to have the most “bundles of joy”.

Millar owned land north of Queen Street in partnership with the Munro family. In 1908 the Beach was becoming a popular suburb and they subdivided the area into 205 lots. Millar built a large, frame house (shown in the black and white archive photo) for himself and his mother atop the hill on Maple Avenue. He was a dutiful son and his mom Sarah lived with him until her death in 1917.

Balmy Beach was annexed into the city in 1909 and a number of street names had to be changed. There already was a Maple Avenue in Rosedale so the street became Scarborough Road. Lynwood was re-named Kingswood Road. and Glendale became Bingham Avenue.

On Nov. 2, 1926 the mansion at 75 Scarborough Rd. was filled with distinguished mourners for Millar’s funeral presided over by Rev. Cotton of St. Aidan’s. It would be the last time a clergyman had a good word to say about Charles Millar.

When his will was read, many thought it was a joke. Millar had been known to drop dollar bills on the street just to watch people pick them up. It was reported that the balmy bachelor slept out on his porch winter and summer.

One time Millar made a bet that horse ownership didn’t take any skill. He would just buy the best horse. In 1915 his entries finished first and second in the King’s Plate at Woodbine. Millar stayed at home in his garden.

The wealthy lawyer and financier had no close family. Distant relatives contested the will but courts ruled it to be legal.

In the Dirty Thirties the world was gripped by unemployment, poverty and the rise of fascism in Europe.

The Toronto Daily Star wanted a way to sell newspapers and take minds off the misery of the day.

Readers got their two cents worth of headlines with profiles of the front-runners in the bizarre “stork derby” with contending families treated like horses in a race to the Oct. 31, 1936 finish.

On May 28 in 1934 another Ontario baby story became sensational world news.  The Dionne Quintuplets were born near North Bay.

The government took the five infants away from their parents and displayed them as a tourist attraction. Hollywood came calling and the quints appeared in a number of films including The Country Doctor (1936).

If the Dionne family had lived in Toronto, their 12 children would have easily won the baby race. Four women with nine babies each were declared the winners and shared half a million dollars.

In The Stork Derby (2002), Megan Follows plays a fictional reporter who covers the story.

The TV-movie depicts how immigrant and Catholic women were discriminated against in a Protestant-dominated city.

Today, Little Italy has a plaque to the memory of court interpreter Grace Bagnato who helped many newcomers and was shut out from the fortune.

Charles Millar was trying to make a cynical point that everyone has their price. Perhaps he got the last laugh from the grave.

The big house on Scarborough Road is long gone. It became a nursing home in the 1930s and was torn down in the mid-1950s to make way for an apartment building.

A part of Balmy Beach lore was lost with it. I would love to hear from any reader who remembers the house on Scarborough Road and the strange tale of the “stork derby”.