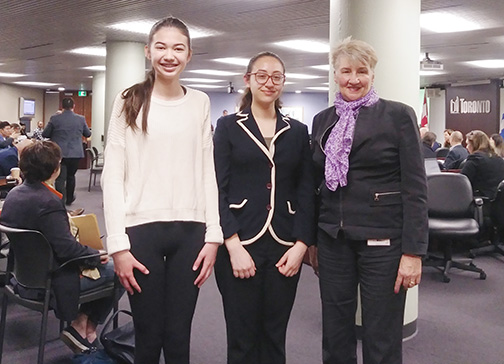 Two local students are calling for six Accessible Pedestrian Signals (APS) to be placed in the Leslieville area to help  seniors stay safe.

Dalia Amer and Maddie Dick made a presentation to last week’s Toronto and East York Community Council meeting calling for the APS systems to be installed at a number of locations including Queen Street East, Gerrard Street East, Carlaw Avenue and Greenwood Avenue.

Presently, there are only four APS systems in Leslieville – three on Leslie Street at Lake Shore Boulevard East, and one at Jones Avenue and Queen Street East.

Accessible signals let pedestrians who are visually impaired know when they have the right-of-way to cross at a signalized intersection and what direction to cross.

The students both attend Bloor Collegiate, but live in the east Toronto area.

Toronto-Danforth Councillor Paula Fletcher backed the call by the students.

“The safety improvements that these students have suggested will assist the most vulnerable road users and contribute to realizing the City of Toronto’s Vision Zero Safety Plan,” said Fletcher, who made a successful motion to community council to call for the six new APS systems to be installed in Leslieville.