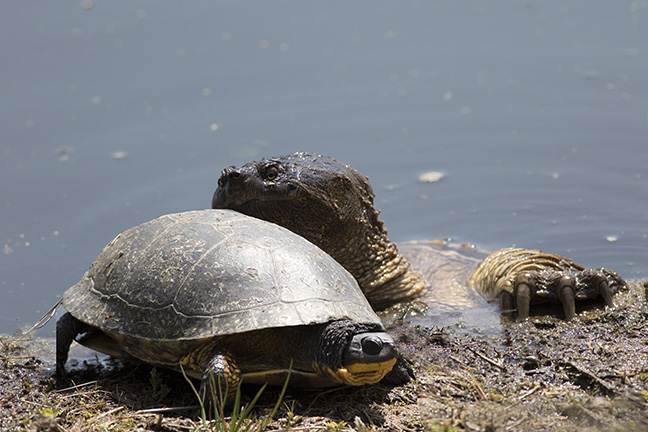 Ann Brokelman took this photo of a snapping turtle making its way out of a pond at the Evergreen Brick Works towards a Blanding’s turtle recently. What happend next? Read Ann’s column. Photo by Ann Brokelman.

Just the other day I was sitting on the side of a pond by the Brick Works, hoping for a couple shots of some of the returning migrant birds who like to nest in the area.

While I came to this spot for that particular reason, in these moments I generally like to sit back, relax, and wait and see what surprises nature has in store for me.

I enjoyed the company of red-winged black birds, several of whom were stretching their wings, flying about, and calling for a mate. A small garter snake slithered from the reeds in front of me, giving me a little bit of a start. I was also thrilled to see more than a dozen painted turtles, both small and large, and one of Ontario’s threatened, (likely to be endangered if we don’t do something soon), Blanding’s turtles sitting on floating moss pad.

While it’s nice and peaceful when nobody else is there to disturb the scene, it would have been nice to have had a witness for what was about to happen. Luckily I had my camera, or I’m not sure anyone would believe me.

What happened next was right out of a horror movie: thrilling, captivating, and terrifying.

As I was watching the Blanding’s turtle, minding his business, I saw movement under the water behind him. Slowly, huge claws came out of the water. They were followed quickly by the head of a massive, I would guess a 100-year-old, snapping turtle. As the rest of him emerged from the depth of the pond, the Blanding’s turtle finally noticed and started to move as quickly as any turtle ever could.

I honestly didn’t know what would happen next. As I took my first pictures my mind was going in a dozen directions at once: would the snapping turtle try to eat the Blanding’s turtle? Could the Blanding’s make it away from danger on it’s own?

As the snapper heaved his body onto the moss pad, it turned out he was too heavy and toppled backwards back into the pond. At the same time the Blanding’s had escaped on the other side of the pad and was swimming away to a safe distance.

I’ll never know the snapping turtle’s intentions, but, after the Blanding’s escaped, he never tried to get back on the moss pad, and all I could see of him was his nose poking above the water.

Did you know that all of our turtles are now on Ontario’s protective species list? While snapping turtles don’t have a lot of predators, every additional car is a potential threat as they frequently cross roads moving from pond to pond. Snappers lay approximately 40-50 eggs at a time, in late May and early June, but they aren’t mature enough to lay eggs until they are 17 – 18 years old.

Blanding’s reach maturity at 14 and lay approximately 22 eggs. You may recognize these gorgeous turtles by their yellow chin and neck. While we lose many turtles to cars every year, they are also at risk from the racoons and foxes that prey on their eggs.

Please do some reading on how to help Ontario’s turtles. You can report when you have seen them, (expecially the Blanding’s, so they can track their populations); you can call wildlife organizations to help an injured turtle; or you can help them across the road.

First, be very careful of oncoming traffic for your own sake, and be very careful about grabbing a snapping turtle, as they can cause serious damage to your fingers, hands, or anything they can get their jaws on. Have a great spring.