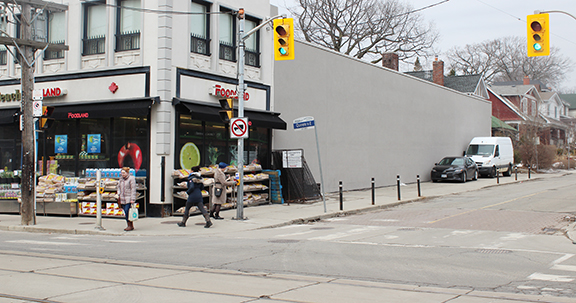 A new mural is planned for the wall of the Foodland store at Queen Street East and Lee Avenue. Artist John Kuna has been selected to create the mural and residents can give their feedback during a community consultation meeting set for May 13.

Artist John Kuna has been selected to create the new mural which will appear on the wall of the Foodland grocery store on Queen Street East at Lee Avenue in the Beach.

Mural Routes and Foodland are partnering on the plan to produce the new mural which is intended to be unveiled on July 27 as part of the Beaches Jazz Festival celebrations.

The new mural will replace the old one which had to be removed in the fall of last year due to cracks in the wall which had made it unsafe. (https://beachmetro.com/2018/11/08/mural-removed-from-foodland-store-wall-at-queen-and-lee-will-be-replaced-in-the-spring/)

That mural, called Beach Got Rhythm, had been created by artist Rudolf Stussi and his son Errol in 2007 and depicted a number of Beach landmarks and jazz musicians.

Kuna has been an artist and muralist for more than 20 years, having created more than 40 works and murals across Canada, the United States and Europe. He has a strong connection to the Beach area as his first studio was on Queen Street East, and he would often join fellow artists to work on painting landscapes in the area.

“Foodland has been a proud part of the Beach community for over a decade. The project aims to produce a new mural that celebrates Foodland’s commitment to the local community and the unique characteristics of the Beach,” said a press release announcing Kuna’s selection as the artist to head up the project.

Local residents are invited to get a first look at Kuna’s proposal for the mural at an event set for Monday, May 13 at the Beaches Branch Library on Queen Street East. Kuna will be at that community consultation session to gather feedback about the proposal.

For more information and updates on the Beach mural project, please visit https://www.muralroutes.ca/Beaches-Mural-2019