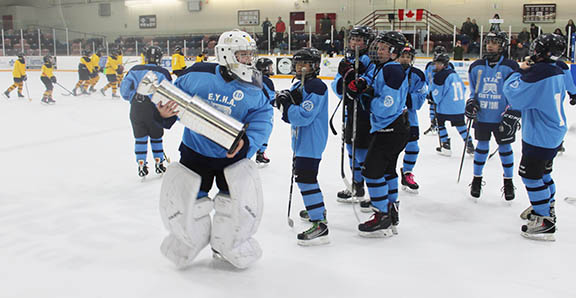 The East York Hockey Association marked a pair of important milestones on the afternoon of Saturday, March 30.

The EYHA wrapped up its 75th anniversary season with playoff games and closing ceremonies for the different age groups in the association at what is known as Little Stanley Cup Day.

Along with celebrating three quarters of a century of providing minor hockey to young players in East York, the day was also the 65th anniversary of The Little Stanley Cup championship game contested for by Pee Wee teams.

This season’s champs were the New York team who beat Boston in the final game.

The EYHA is the only minor hockey league allowed to present a Stanley Cup replica, and it was given special permission to do so by the National Hockey League by then league president Clarence Campbell back in 1954-55. East York’s Little Stanley Cup is a three-foot high replica of the real Stanley Cup.

Due to the executive, coaches and referees freezing while at the outdoor rink from 7 a.m to 10 p.m. – small huts were placed between the rink with heaters inside. In the meantime members of the executive and local politicians were making a pitch for an indoor artificial ice arena.

Due to the dedication and hard work of many volunteers East York Arena came into operation before the 1951-1952 season. The season opened with the Toronto Maple Leafs playing a Blue VS White game.