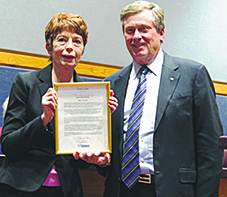 This award recognizes excellence in social justice leadership in the East York community and is named after Agnes Macphail, the first woman to be elected to the Canadian House of Commons and the Ontario Legislature.

Fraser’s past projects represent a consistent commitment to her community, and she has also revolutionized the concept of volunteer work for several causes across the country. These include but aren’t limited to transporting restaurant-catered food to shelters in Quebec, providing sleeping bags for the homeless and supporting the Toronto Wildlife Centre.

Her book, Women Like Me – The Women’s Business & Networking Directory, has been published in nine editions as a networking support system for Canadian women.

Fraser was nominated for the award by group of her colleagues and associates.

Natalie Chinsam, a professor of business at Centennial College delivered an emotional speech about Fraser’s impact on her life.

“Karen Fraser has been my mentor for over 15 years… She provided me with sound advice and has stood by me..,” Chinsam said. “I will always remember your positive energy, your strength and your capacity to remind me always to be grateful.”

“Any young woman looking to make a change to society would do well to look to the example of Agnes Macphail, and the strength of Karen Fraser,” said Wynne.