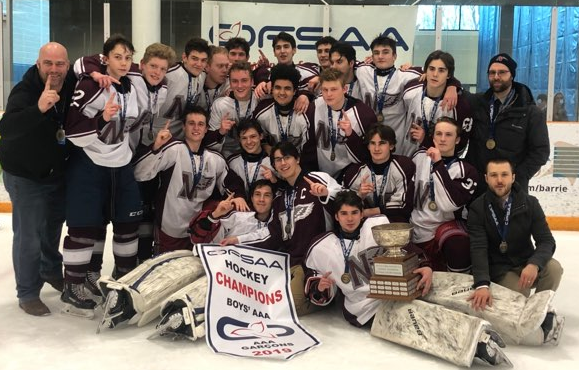 The perfect run at OFSAA was the crown on a 26-0 undefeated season for the team.

But it wasn’t a walk in the park for the Neil McNeil boys at OFSAA as they had to overcome a three-goal deficit in one of the preliminary round games, and then win the semifinal in a shootout against the defending champs.

Coach Peter Ranson said the “turning point” for the Maroons was their second game in the premliminary round against Waterdown.

Neil McNeil had been ranked fifth in the 16-team tournament, and Waterdown was ranked third.

“We were down 4-1 at one point in that game and trailed 4-2 at the end of the second,” said Ranson. “We had a really good talk and the boys brought it in the third.”

The Maroons scored three unanswered goals to win the game and also gain a huge amount of confidence and momentum.

“We believed we could overcome any adversity,” said Ranson. “The boys really battled back, and after that game you could see other coaches were looking at us.”

The third and final game of the preliminary round was a 4-2 win for the Maroons over Jean Vanier Catholic Secondary School of Milton on the morning of March 21.

That put Neil McNeil into a quarterfinal game later that day, and the Maroons skated to a 5-4 win over the St. Thomas of Villanova Wildcats from La Salle.

That win put the Maroons into the final day of the tournament, where they faced defending AAA Ontario champs the Brooklin High School Bears in the semifinal.

The game was tied after regulation time, and ended in a shootout in favour of Neil McNeil.

With that huge win under their belt, the Maroons then headed to the championship game late Friday afternoon against Elmira District High School.

“At that point, we just knew it was ours,” said Ranson. “We knew we were a team of destiny and were going to have a perfect season.”

The Maroons won the championship game 5-2.

Ranson said all the players had a great tournament at OFSAA, including a number of players from the Junior team that were brought up to play with the Seniors.

Will Smith and Patrick Saini, both Juniors, provided lots of energy and strong play for the Maroons at the OFSAA tourney. Saini ended up as leading scorer with 14 points in the tournament, and Smith was extremely solid on defence, said Ranson.

“Their job was to push their brothers,” said Ranson, and their addition gave the Maroons more depth than many other teams at the OFSAA championships.

“Being deep really helped us. Most other teams only had one big line and we had four strong lines.”

The team qualified for the OFSAA championships by winning the City of Toronto title for Catholic schools in early March.