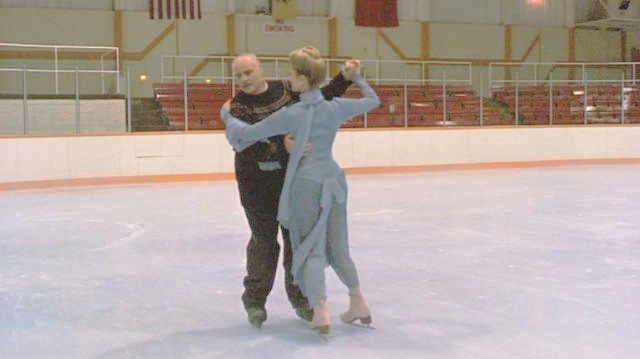 Marlon Brando skates with Sandra Bezic during this scene from 1990's The Freshman, which was filmed in Toronto.

Toronto’s Sandra Bezic is one of the most influential people in the competitive world of figure skating. She has played many roles: five-time Canadian Pairs champion with her brother Val, television commentator, producer, director, author, Emmy Award-winner for Stars on Ice, choreographer for three Olympic gold medalists and co-creator of Battle of the Blades.

There is one unusual task Bezic remembers very well: personal skating coach to the legendary actor Marlon Brando for a scene in The Freshman (1990).

It was the summer of 1989. Brando had not played the lead in a film for almost a decade. Producers “made him an offer he couldn’t refuse” and Brando showed up at Magder Studios on Pharmacy Avenue in Scarborough.

“I coulda had class. I coulda been a contender.” (On the Waterfront)

Brando is considered by many to be the finest actor of his generation, nominated for eight Academy Awards and winning two Oscars for On the Waterfront (1954) and The Godfather (1972). In his prime Brando was a matinee idol, but by 1989 he wasn’t in any shape to be “a contender” in ice skating.

In The Freshman, Brando plays a self-parody of his gangster character Don Vito Corleone from The Godfather. The zany comedy has Toronto locations like U. of T. standing in for New York City and New Jersey.

Sandra Bezic was kind enough to take time out from her busy schedule to write about working with the famed actor:

“Marlon Brando! I had a wonderful experience with him. We worked together for The Freshman on and off for a four-month period in Toronto and New York. Several times a week we would spend an hour or so on the ice alone together. He always arrived with little or no entourage.”

“I know I’m not an easy person to get along with. I’m no walk in the park.” (Marlon Brando)

Brando had a reputation for being difficult, but Bezic found him “kind, charming, playful, a flirt, sometimes crude when his friend was around, and intuitive. We’d skate a lap around the rink then stand at the boards while he rested and told me all sorts of stories about his life”.

“The first day – Weston Arena, Toronto – I begged him to wear a helmet, elbow pads and knee pads, which he refused. He promptly fell and hit his head on his first step. He wore a helmet from then on. He was large at the time and I gripped with all my might to hold him up as we glided along- him going forwards – me backwards. My arms and back would get very sore!”

“I’d stare into his eyes looking for Marlon Brando until finally he started wearing sunglasses because he said I was distracting him. He’d make me skate for him because I ‘skated like a swan’. He said he planned to learn how to skate just by watching me. He’d pretend to fall and then would try to pull me down on top of him.”

“One day I was a little upset with him because he had stood me up the day before and I had travelLed a distance to skate with him. I thought I hid my feelings and remained professional. That night I received flowers and a poem… he had sensed I wasn’t happy. One would expect a star to be oblivious, but he was an observer. He never missed anything.”

“He decided I should be in the film with him and personally took part in the design of my costume and hair. I was quite done up! He wanted a lot of chiffon but we were travelling too slowly for it to flow! “

“On set he was especially kind to the crew and had time for a picture and autograph for everyone. (I didn’t ask for one as I didn’t want to impose more on him.) He sent me flowers, thank you gifts and a few poems- mostly under assumed names. We kept in touch for a while afterwards. Then it fell off… and then his family tragedies unfolded.”

Brando held the Hollywood studio bosses in contempt. He’d grown up as the only son of an alcoholic mother and a cold, distant father.

Bezic writes, “I got the impression Brando liked disputes. He really didn’t like authority figures.” Toward the end of filming Brando gave a rare interview with the Globe and Mail trashing the movie as “the biggest turkey of my career”.

He wanted an extra $50,000 for overtime. News photos showed Brando in a neck brace from “a skating fall”.

Bezic says, “He faked an injury and wore a neck brace to resolve a contract issue, but made sure I knew it was a fake and that he really wasn’t injured.”

After receiving his money Brando recanted and said the film “contains moments of high comedy that will be remembered for decades to come.”

Rolling Stone extolled “one of the real pleasures” in the film was “watching Brando ice skating with surprising agility”.

One critic singled out “a wonderful skating sequence in which he glides across the rink like a polar bear”.

Others enthused, “Even more impressive, he really dons ice skates and he soars around the rink with amazing grace” and “accompanied by a beautiful lady in gauzy blue.”

Bravo coach Bezic! In 2018 Bezic was inducted into the World Figure Skating Hall of Fame. Brando only made a few more films and died in 2004 at the age of 80.

Bezic says, “I do hold dear these memories. He was a complicated man, but very sweet and kind to me.”

What could be more Canadian than ice skating? For those who are young at heart there is free skating for seniors (60+) Mondays and Thursdays 1:30 to 3 pm. at East York Memorial Arena. Take a spin for Bezic and Brando, maybe not contenders, but a class act!