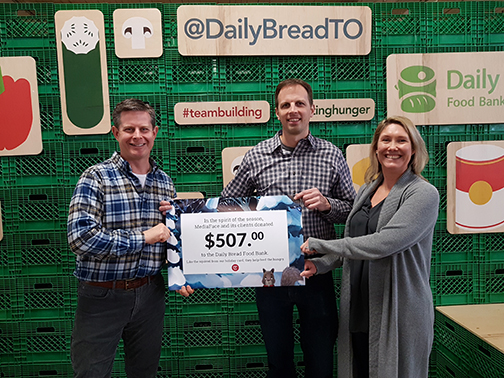 The Daily Bread Food Bank has partnered with a Leslieville content creation company for their latest fundraising campaign.

The organization collaborated with MediaFace to create an Augmented Reality (AR) holiday card for the community. Residents who received the card would notice its snowy design and then would need to download its corresponding mobile app. Following this, they would hold up their mobile device’s camera to the card to scan, and the augmented reality would begin to play.

The story within the card displays the tale of a kind-hearted squirrel named Maple who feels the need to feed a hungry neighbourhood bear. After careful planning, the squirrel puts acorns outside for the bear to wake up to. The story was intended to tell the similar story of encouraging community members to help give back. The card was sent out in early December, where MediaFace donated $1 for every view.

The story was designed by MediaFace’s creative team after several weeks of strategizing. CEO and founder of MediaFace, Lisa Bragg, explained that the staff pitched the idea for the card and chose the charity they wanted to support with it.

“They went through and looked at who’s in need, who did we think would really benefit from this and also who would fit with the storyline of the card,” Bragg said.

This was the company’s first time doing this kind of campaign, and as a result, they were awarded the 2019 AVA Digital Award for Best Digital Video Creation using Augmented Reality.

A spokesperson from the Daily Bread Food Bank, Ruth Gebremedhin, explained that the unique and innovative idea was something they couldn’t pass up. The charity has reached out to Toronto food banks with the goal of ensuring that no one goes hungry. This is most crucial during the holiday season, she said.

Gebremedhin also added that the outcome of the campaign was better than they expected.

“It was fairly successful for a first time campaign like this for us, and I am so interested to see what their next project would be,” she said.

The animated video was viewed 107 times at $1 a view, and with MediaFace’s donation of $400, the campaign’s total amount came to $507. The Daily Bread Food Bank plans to run another campaign like this next year, in addition to partnering with companies who share the same goal of tackling hunger and poverty in the city.

Those who wish to view the card in live action can watch it at http://mediaface.ca/augmented-reality/