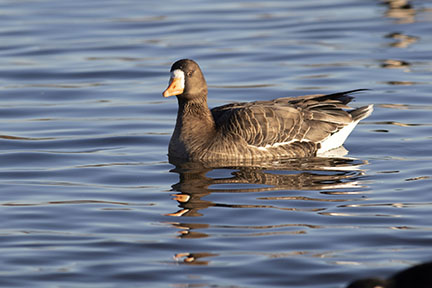 Photographer Ann Brokelman spotted a pair of Greater White-Fronted geese recently, thanks to some help from sharp-eyed granddaughter Lara. Photo by Ann Brokelman

Just because it may be more comfortable to stay inside, by the fire or just under some blankets, doesn’t mean there isn’t a lot of amazing birding to be done around our city.

Yes, it may not be as pleasant to be outside as it is in the spring and summer, but consider the positives: you never know what wildlife will be around, there are fewer other people around, the snow makes for great landscape pictures, and think about how much you’ll appreciate the warmth of your home after being outside in -20 degree weather!

One example of a happy winter surprise came just the other day while I was down at Tommy Thompson Park, where I saw a beautiful Harlequin Duck, (Histrionicus histrionicus).While small, it is one of the most beautiful sea ducks I have ever seen.

While I have seen them before, I had never seen one so close and I got a variety of great shots. These birds are also called “sea mice” and “squeakers” because their call could easily be mistaken for a mouse.

Another example of never knowing what you’ll find in the winter: just the other day I was picking up my eldest granddaughter, Lara, after school and we decided to go visit a pond near her home.

We arrived at the pond and there were more than a thousand, Canada Geese.

While a group of geese is called a gaggle, this many could only be thought of as a flotilla!

Lara and I usually look for swans at this pond, (her favourite is named Tutu), but they were either hiding too well amongst the geese or were visiting a different pond somewhere else.

There was no ice on the water, but the path around the pond was flooded, so we could walk closer to the water than we normally would have I was feeling a little disappointed, when Lara said, “Look Oma, those ones have orange heads.”

I think I must have initially dismissed this as a trick of the light or a reflection, because we don’t have any geese around here with orange on their heads. However, and I will hereby warn you never underestimate how good the eyes of children are, there were indeed two geese, smaller than the rest, with bright orange eyes, bills, beaks (a mix of pink and orange), and legs. Lara had spotted two Greater White-Fronted geese.

Is this really a big deal? Well, to me it is!

These are an arctic breeding goose that don’t usually migrate anywhere near here. If they live in the Canadian Arctic they shouldn’t be nesting East of the Great Lakes and the only other reasonable alternative is that they are from Greenland/the Maritimes and, if you know your geography, they are more than a little off course!

It’s getting more and more rare for me to see a new bird around here, so I was as happy as the goose that wasn’t chosen for Christmas dinner.

We continued to look for signs of other nature, and I told her to keep her eyes open for frogs and turtles. She looked at me like I hadn’t been paying attention in Kindergarten class and told me: “Don’t be silly Oma, those are hibernating for the winter!”

Apparently Lara has a great teacher who is teaching them all about the lives and behaviours of Canada’s animals.

Lara proceeded to tell me all about the migration of a variety of birds, and she even knew how to tell the difference between the male and female Canada goose.

She even told me about which animals hibernate during the winter. I think her generation will do a good job taking care of the environment, so long as we can keep it healthy long enough for them to take over.

Nature is wonderful for kids and you should consider taking your kids/grandkids out to your local park. Who knows what you’ll see or what you’ll discover they’ve learned in school.
Do you have a story to share about you, your kids, or grandkids doing nature walks or birding?

Please consider sharing it with me and maybe we could turn it into a future article.