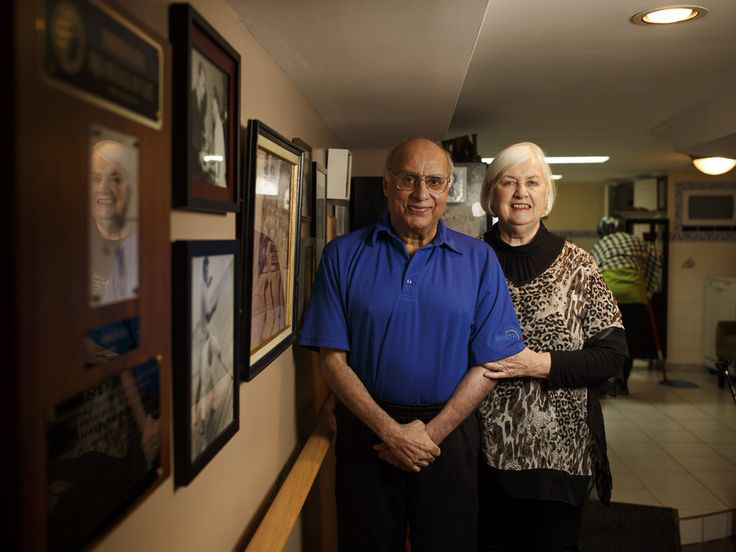 Sharif and Karen Khan. Karen co-authored the Sheriff of Squash with Rob Dinerman.

How does a young squash prodigy growing up near the Afghanistan border in the 1950s become one of the world’s greatest players and an honourary lifetime member of the Balmy Beach Club?

The Sheriff of Squash is a new book about the life of legendary squash champion, Sharif Khan – his journey from a small village in Pakistan to the top of his sport to the Beach in Toronto.

From 1968 to 1982, Khan won almost every major North American hardball squash tournament in the United States, Canada, Mexico, the Caribbean and Central America.

He reached the semifinals of the British Open international tournament – the “Wimbledon” of squash – and was ranked as high as number four in the world. But there’s more to the man than squash accolades.

The Khan family was a squash dynasty. Sharif’s Uncle Azam Khan, cousin Mohibullah Khan and later his younger brother Aziz, were all squash stars in their own right.

Sharif’s father, Hashim Khan, is an international sports hero. He mastered the game of squash while working at the British Air Force officers club in the 1930s and ‘40s in Peshawar, Pakistan. In the 1950s, Hashim won the British Open seven times and toured Europe and Australia representing his country.

Sharif followed in his father’s footsteps as a squash great, but that reputation came with its advantages and disadvantages.

Sharif was born in 1945 to Hashim and Meheria Khan in a small village in Pakistan, not far from the Afghanistan border. At age 11 and already a promising squash player, Sharif was given a scholarship to study at Millfield School in England, a prestigious prep school thousands of miles from home.

When told about the opportunity, Sharif responded: “What is England?”

Sharif overcame loneliness, little knowledge of English and bland food to become a solid student and a standout squash player at Millfield.

In high school, Sharif was the winner of the Drysdale Cup (precursor to the World Junior Championship) and the local county Men’s “A” title.  At age 13 he defeated a 30-year-old opponent to win the county championship, earning a celebratory day off for his classmates which made him very popular!

Dashing his plans to go to university or to further his squash career, Sharif was told to come home to Pakistan after graduation.
He was devastated to learn his parents had made arrangements for him to marry his cousin. He went through with the traditional ceremony but was unhappy.

In 1967, he moved with his wife from Pakistan to Detroit, Michigan, a tough town where his father was the squash pro at the Uptown Athletic Club frequented by General Motors executives.

Sharif divorced and moved to Canada in the late 1960s for a squash pro position at a club near the Toronto airport, much to the disappointment of his father.

In 1969, Sharif defeated his cousin Mohibullah Khan in the North American Open, the most prestigious tournament after the British Open. One year later he had to defend his title – against his father. In Sharif’s words: “It really isn’t describable what my heart and soul went through in that match.”

Sharif was victorious and at the end, father and son embraced in a moment he described as “electrifying, humbling and childlike…forgiveness seemed to be eclipsed by his act of acceptance.”

Sharif went on to travel the world, reaching the heights of his sport and setting squash records that have yet to be broken today.
He was the dominant player throughout the 1970s.

A sign of his supremacy, Sharif was invited to play in an unusual series of events in the 1970s called, “King of the Racquets Invitational” put on by CBS Sports. Leaders in a variety of sports (squash, tennis, racquetball, table tennis & badminton) played against each other in every sport but their own. In 1977, Sharif won the event by defeating Bjorn Borg in table tennis in the defining match of the tournament, helping to put squash on the map.

Canada would continue to be Sharif’s home. He consistently worked as a professional and even opened a club bearing his name in the Toronto area.

In the 1990s he spent several years at the Mayfair Club on Lakeshore Boulevard East in Toronto, enthusiastically giving lessons and acting as a goodwill ambassador for the sport.

He subsequently moved to Collingwood for an opportunity to invest in a business. But life always led back to Toronto.

The Sheriff of Squash was co-authored by sports writer Rob Dinerman and Sharif’s wife Karen Khan, whom he met at a party in 1992. On their second date they met at the Balmy Beach Club in east Toronto where Sharif was giving a lesson. Karen and Sharif married in 1996.

And, after settling fulltime back in Toronto in 2008, the Balmy Beach eventually became “his club”.  Sharif’s days were filled with tournaments, leagues, and lessons as well as the expansion of the junior program. In recognition of his contributions to the Balmy Beach Club, The Sharif Khan Award is given every year to the junior squash champion. He is also an honourary lifetime member.

In February 2014, Sharif had a massive stroke. He has spent the last years undergoing intensive therapy.

“Life throws curves, and my illness has been a big one,” wrote Sharif.  “My dream, and literally I dream this, is that I will be back on court one day and feel the weight of the ball against my racquet.”

The Sheriff of Squash is available on Amazon.  For more information visit www.sharifkhan.net

– Mary Beth Denomy is the Community Director at the Balmy Beach Club.