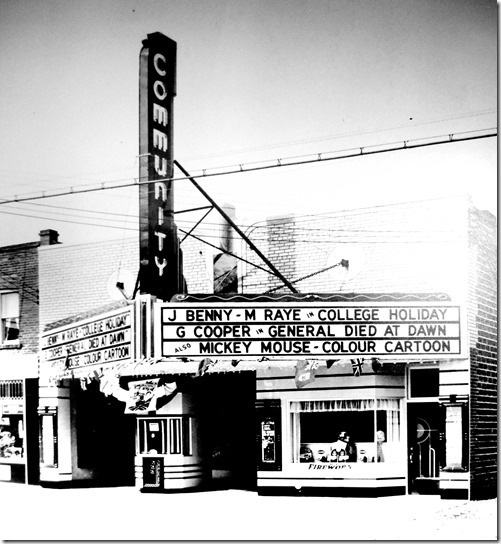 The Community Theatre at 1202 Woodbine Ave. closed its doors in 1955. It then became the home of Meridian Films until 1964, and now houses an auto repair shop.

Toronto has a booming film and television industry with new studio space opening each year. There is even a Studio District in the Port Lands area and along Eastern Avenue.

Let me take you back in time to the 1950s when there was virtually no feature film production in our city.

It’s 1955, and the Community Theatre at 1202 Woodbine Ave. closes its doors. People are staying home to watch that new marvel called television. A new company, Meridian Films, renovates the old theatre into a film studio with high hopes of starting a fledgling movie business.
Canada was known for National Film Board documentaries and short films, but Hollywood dominated the feature film industry. Long before Toronto became Hollywood North, a young writer for the CBC had a dream of making movies in his home town.

Sidney J. Furie was born in 1933, an only child who loved going to the movies. The 1930s were an ominous time for a Jewish kid from the Spadina area. Anti-Semitism was on the rise with a riot at Christie Pits and swastikas in the Beach area. “Movies gave the ugly world that I knew the only happy ending. If you took that away, I don’t know what I would have done growing up, knowing the horrors of the Holocaust,” said Furie in the 2015 bio Working the Angles, the Life and Times of Sidney J. Furie by Daniel Kremer.

Furie figured that if other countries could tell their stories, then why not us? He scraped up financing from family and friends and made the black and white feature A Dangerous Age in 1957 at Meridian Studios. The tale of two young people in love was based on his failed elopement when he was 20 years old.

The film received some good reviews in Britain and Cannes, France, but had little success in Canada. Furie used his own experiences again for his second film, A Cool Sound from Hell (1959) about the Beat Generation. Filming began at Meridian Studios in November 1958 about the same time as The Bloody Brood (1959) was shooting at the Woodbine studio.

Films like Rebel Without a Cause about youths getting in trouble were all the rage in the 1950s. An unknown actor, Peter Falk, played the villain in The Bloody Brood. There’s a twist for the future Furie was hardly James Dean, but he based his second feature on a brief encounter he had with a ‘femme fatale’ involved in drug running. A Cool Sound from Hell explores the underground beatnik culture of the day.

City streets didn’t just “roll up” at 10 p.m. There actually was night life in the ‘Toronto the Good’ of the 1950s after all the “squares” had gone to bed. The film presents a snapshot of our past. It is fascinating to watch hipsters driving around in a sports car. It’s our city, but a very different looking Toronto. We see Yonge Street and there’s a key encounter at Union Station.

Furie wanted to use the streets of Toronto, filming in public places without permits. A Cool Sound from Hell is a rare glimpse into a forgotten time with jazz clubs and the camp lingo of the day. Daddio, can you dig it, man? Are you hip to the vibe? The Globe and Mail wrote that the film was “proof that modest features can be produced in Toronto”, but A Cool Sound from Hell wasn’t given any distribution in North America. Furie gave up and moved his family to England in 1960. In 1962 he lamented to the Canadian Press, “I wanted to start a Canadian film industry, but nobody cared.”

Furie’s breakout film was The Ipcress File in 1965 starring a young Michael Caine who says, “I wouldn’t have had a career without him.”

Hollywood soon came a calling and the director went on to a successful career working with big stars like Brando, Sinatra and Redford and on films like Lady Sings the Blues.

A Cool Sound from Hell was long thought to be lost until a copy turned up in England in 2015. The film only had its North American premiere at TIFF in 2016. I had the pleasure of listening to Sidney J. Furie talk about his experiences making the film.

“I was robbed of having this film play. Now it’s a museum piece, but an interesting one. We had no industry, but we had hopes and dreams. I have a tear in my eye, to see TIFF, this great city. We all regretted we had to leave. The saying was, ‘If you’re so good, why aren’t you in New York?’”

Furie had to wait almost 60 years, but A Cool Sound from Hell was the best title in the festival. An entire generation of talented Canadian filmmakers moved away to fulfill their dreams. Norman Jewison left the CBC and his home in the Beach to find fame elsewhere as did directors Ted Kotcheff and Arthur Hiller.

The Canadian film business languished in the shadow of Hollywood until the 1970s. Meridian Films closed up shop in 1964. The old Community Theatre (1937-1955) on Woodbine Avenue where Peter Falk once did his bit now houses an auto repair shop.

Just one more thing, as Columbo would say. If you want to learn more about Furie, read Kremer’s book or check out a terrific TIFF tribute to Furie’s visual style on youtube.