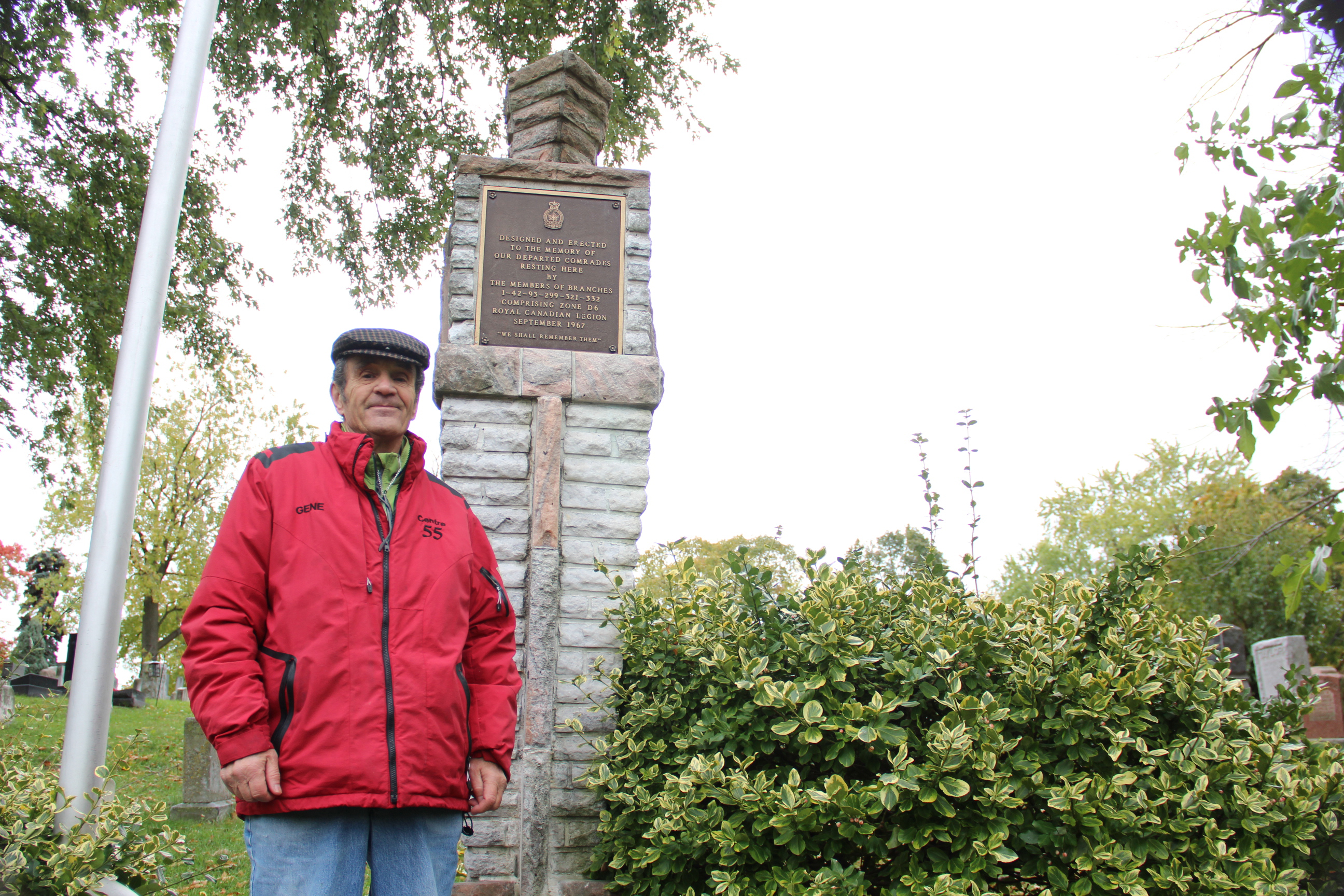 Columnist Gene Domagala beside the monument to fallen soldiers at St. John's Norway cemetery. More than 500 veterans are buried in the cemetery.

Sunday, Nov. 11, marks the 100th anniversary of the end of the First World War, “the war to end all wars.”
Since then there has been the Second World War, the Korean War and many other conflicts that have claimed countless millions of lives. In these conflicts, Canada has sent over the “flower of youth”, men and women to fight for what we call “the cause of freedom’.

On this anniversary never forget those who fought and gave their lives to this cause. This should be directed to the youth of our country.

Although this year’s Remembrance Day ceremony is on a Sunday morning, observances should be held at appropriate times in schools for young people to be made aware. Schools, religious organizations, and Legions have the names of these brave soldiers in a conspicuous place of importance.

In the eastern part of the city and the Beach area, we have monuments related to this 100th anniversary. There are three such memorials that should be noted.

The first such monument is dedicated to a doctor who lived in the Beach and dedicated his life to helping the less fortunate, and to our Beach soldiers. Dr. William Young helped many of those young soldiers at no cost, tried to mend their broken bones and “shell shock” experiences. His aid to these soldiers is legendary.

There was a great tragedy that came during the last years of the First World War and the years after called the Spanish Influenza which killed more than 50 million people worldwide. Canada was no exception.
Not only did hundreds of soldiers die of this disease in the east end but also hundreds of civilians. Dr. Young was helping them and he himself died of it.

In his honour, the people of the Beach and the east end erected the Dr. William Young Memorial Fountain to recognize his devoted work to

the people of this area. The memorial is located in Kew Gardens at Queen Street East and Lee Avenue, approximately 1,000 feet south of Queen on the west side of Lee.

The second monument is located in Kew Gardens on the south side of Queen Street opposite Bellefair Avenue. This historic site was built in 1946 by the Business Men and Women of the Beach. It is dedicated to those who fought in the First and Second World Wars, the Korean War, and lately to all the veterans who served our country in other conflicts. The Remembrance Day ceremony is held every Nov. 11 at this monument to honour fallen comrades, live comrades and all those who have served or are serving Canada.

The third monument is in St. John’s Norway cemetery. It is almost lost and forgotten to many, but it is not lost and forgotten to the families of those brave soldiers who gave their lives and are buried in this cemetery close to the memorial. This monument was dedicated during the 100th anniversary of our great Canada in 1967. It was put together by the local Royal Canadian Legion Branches. The monument reads:
“Designed and erected to the memory of our departed comrades resting here by the members of Branches 1-42 – 93 -299 – 321 – 332 Comprising Zone D-6 Royal Canadian Legion – Sept 1967. We shall remember them.”

This monument represents the more than 500 veterans that are buried in St. John’s.

On Sunday, Nov. 11 of this year a Remembrance Day ceremony will be held at the Kew Gardens monument, opposite to Bellefair Avenue, starting at 10:55 a.m. This is held not to glorify war but to condemn it. Peace is the only solution. So we here in the Beach, Toronto, Ontario, Canada salute them. Never forget.