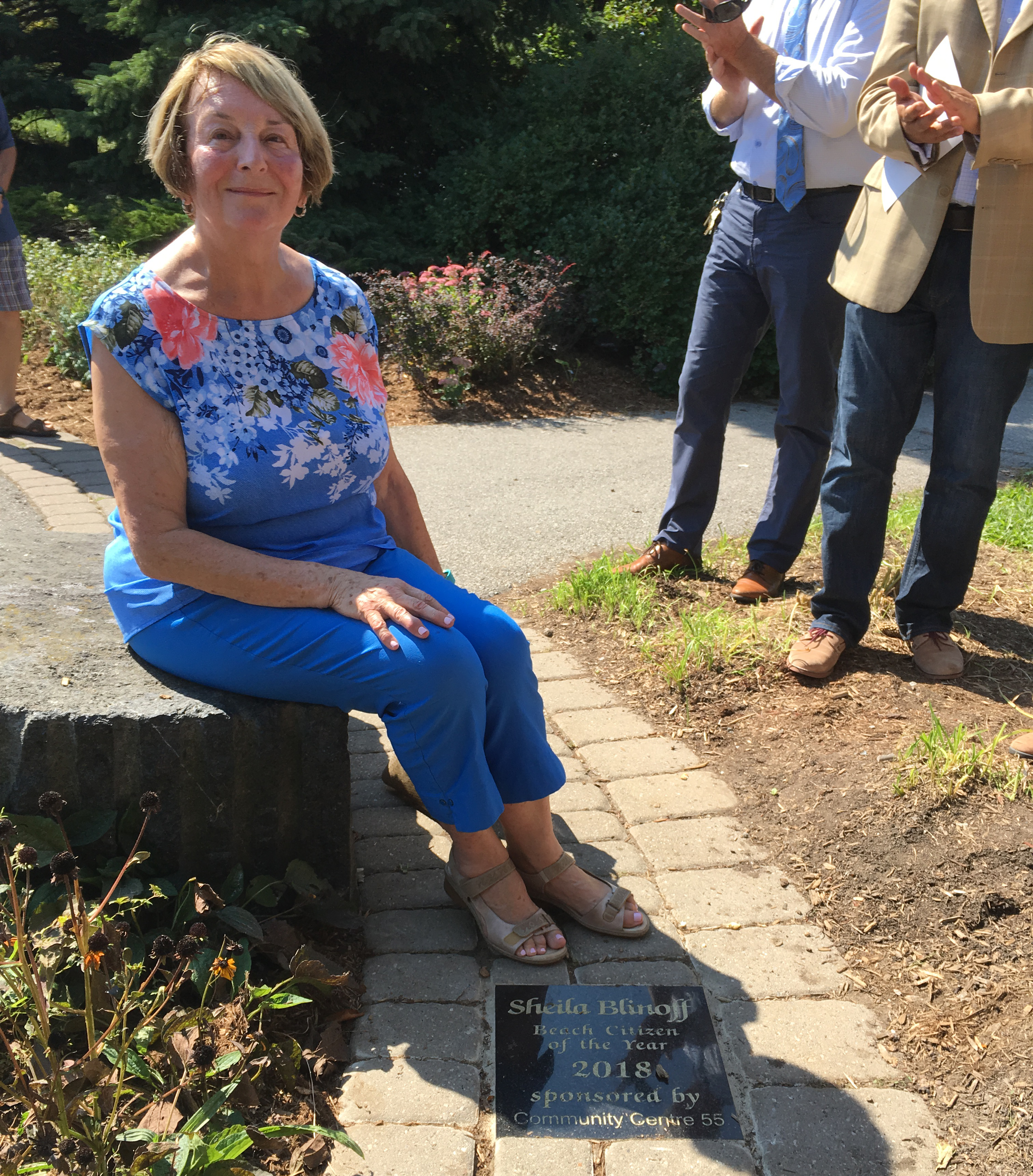 Growing up in a small town, I became aware early of what a difference dedicated volunteers can make to a community.

However until I moved to the Beach, I didn’t realize that right here, in the heart of one of the biggest cities in North America, the spirit of volunteerism was not only alive but thriving. So many of our important community assets, such as Community Centre 55, Senior Link (now Neighbourhood Link Support Services, Beach Metro News and Pegasus Community Project for Adults with Special Needs), were all fostered and developed by local resident volunteers.

A desire to recognize the major impact that such long-term, multifaceted volunteers have had in shaping the culture of our community led to the creation of the Beach Citizen of the Year Award. Over the last 18 years, the names of the Citizens of the Year form an honour roll of people who made an important difference to life in the Beach.

This year I am happy to announce that the 2018 Beach Citizen of the Year is Sheila Blinoff.

Many of you will know Sheila from her over 40 years as General Manager for Beach Metro News. However, Sheila’s contributions to the area go far beyond Beach Metro.

Sheila and her husband Andrew purchased a home on Balsam Avenue in 1969 (for, believe it or not, $28,500). A young mother with a small son, she was eager to get involved in her new neighbourhood. About that time, the Toronto District School Board decided to replace the original Balmy Beach School. A number of mothers in the area began meeting to challenge the open concept design and Sheila became involved in the project. Their idea was for a school that was a community hub which could be used by both elementary students and community members.

When the new school was built, the old school was used for a while to hold classes for adults. More than 400 people were involved. Sheila taught dressmaking and learned how to play the recorder as well as simple electrical fixes. The Balmy Beach mothers also started the first stoop-and-scoop program where volunteers would clean up the area from Leuty to Wineva as well as educate dog owners. “These women really did make a difference. I learned so much from them,” said Sheila.

In 1972 there was a proposal to cut the heart of the community in half by extending the Gardiner Expressway to Scarborough. The plan was only stopped by a vigorous campaign of local residents who felt that a local newspaper would allow residents to keep involved about issues that were important to the area and help voice their concerns. Sheila started volunteering for the paper (then called Ward 9 News) by delivering papers door-to-door and typing copy on her home Smith-Corona.

By December 1972 the volunteer founders of the paper had burned out and left. The paper was in debt. She answered an ad in the December (or early January issue) on the front page to hire three people for four months under a federal Local Initiatives Program. She was hired as the office manager and began work on Feb 2, 1973.

The paper would have folded in August when the LIP grant ended, but Sheila and Joan Latimer decided they would work without pay until the paper received a new grant. This is where she feels she made a real contribution to the community by ensuring the paper survived. They did this for six months, then the community raised $6,000, and they went back to receiving $100 a week and slowly the paper began to pay its way.

One of the volunteers helping out with Ward 9 News was Roy Merrans who had a vision for the newly created Leslie Street Spit Park. Sheila became one of the founding members of the Friends of the Spit in 1975 and spent many weekends passing out flyers to people who visited the spit as well as getting them to become members.

In 1976 the Main Street Library was one of four Toronto libraries being considered for additional funding for an expansion. Sheila was recruited by the Main Street Head Librarian, Helen Cram, to help increase the library’s usage and to select an architectural design. The group, also known as Mainiacs, chose a proposal by Ken Greenberg, which received the additional funding.

Sheila said that over the years she has served as secretary, treasurer and even president of a number of organizations, however, she believes that the job she enjoyed the best was secretary.

“Keeping good minutes is so important. I always wanted people who hadn’t attended a meeting to understand what happened by just reading the minutes.”

She served as Board Secretary at St. Paul’s United Church for four years when the congregation went through the process of selecting a new minister.

From 2006 to 2012 she was the secretary/treasurer for the Scarborough Guild Theatre. This newly formed group established a professional theatre company that puts on an annual classical play each summer at the Greek Amphitheatre in the grounds of the Guild Park in Scarborough—a job that included storing costumes for the performances at her home.

She was a founding member and secretary for the Beach’s Speeches branch of Toastmasters.

Between 1996 and 2003 she served as secretary, treasurer, and editor of the monthly newsletter; then president of the Pot Pourri Society, a non-profit social club with 60 members, offering 12 events a month to 50+ single people.

She also utilized another of her many skills when she created a quilt square for the sesquicentennial quilt (now located upstairs at the Main Library) and two squares for the Beach Library quilt.

In addition to all of her organized volunteering, she has often lent her time and energy to flipping burgers, collecting food, staffing booths and helping out with whatever needed doing for many local projects.

Sheila Blinoff is a worthy addition to the list of Beach Citizens of the Year.