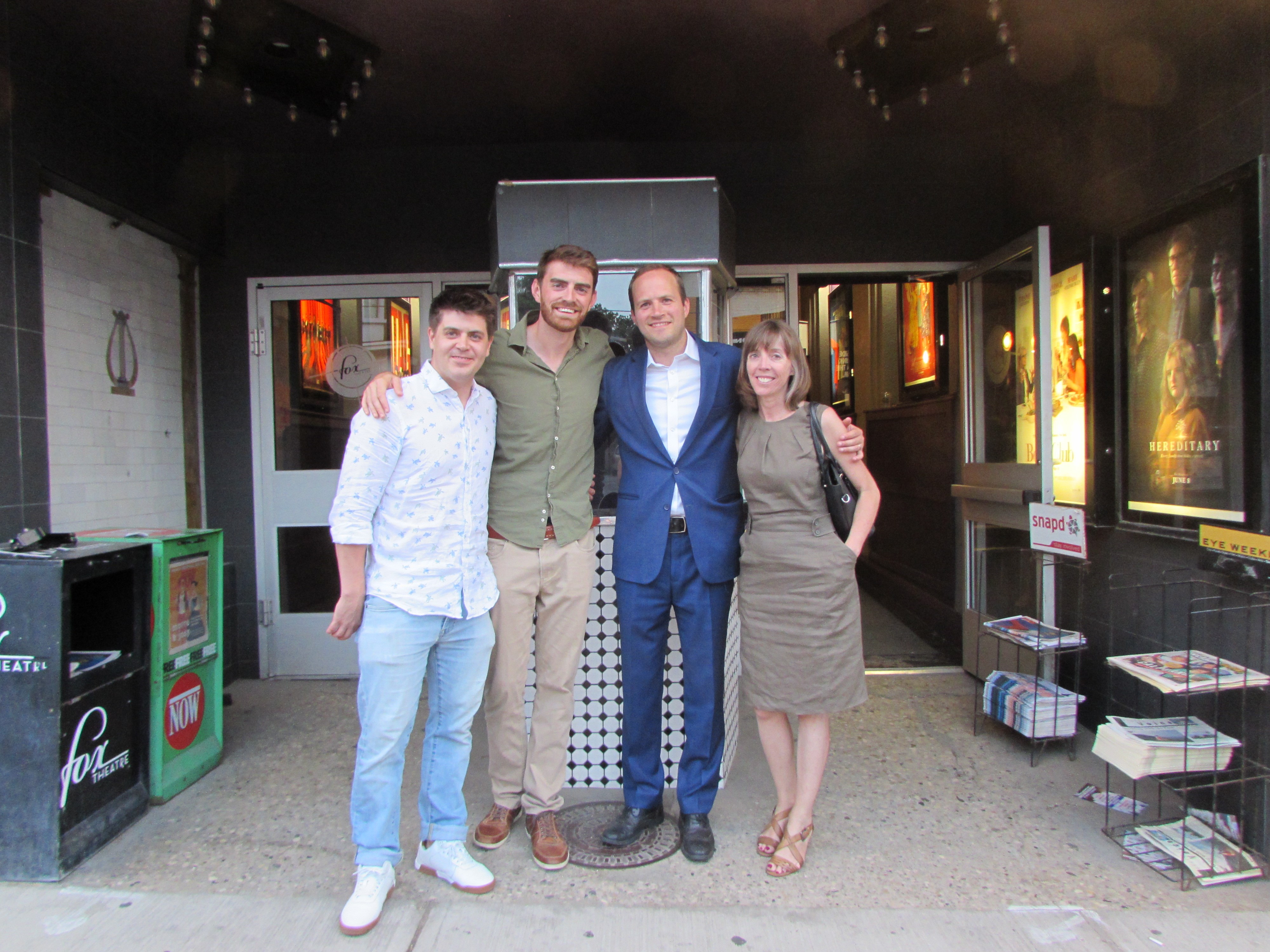 Left to right: Beach brothers Tyler and Alex Mifflin, also known as The Water Brothers, screened an episode of their eco-adventure series, Plastic Ocean, last week at The Fox theatre. The evening was hosted by local MP Nathaniel Erskine-Smith and included a Q&A with the duo as well as plastic pollution expert and University of Toronto professor Chelsea Rochman (not shown). In attendance was Beaches—East York councillor Mary- Margaret McMahon who announced that the public works committee is working on banning plastic straws in Toronto. A second screening of the show is planned for July 31. See MP Erskine-Smith’s column on page 6 for details. PHOTO: Susan Legge

Earlier this year, a report in the journal Science found that the likelihood of disease increases from four per cent to 89 per cent when corals are in contact with plastic. The authors estimate that 11.1 billion plastic items are already entangled on coral reefs across the Asia-Pacific and project this number to increase 40 per cent by 2025.
Plastic pollution also has damaging effects on other wildlife, from fish, to turtles, to seabirds, and more. It affects oceans and lakes, including Lake Ontario close to home.

The problem has many components, from the huge volume of single-use plastics—bags, bottles, straws, etc.—to lost or discarded fishing gear. Thankfully there are new reasons to be hopeful, as we have begun to see citizens, businesses and governments take the issue seriously.

Locally, we were overwhelmed recently by the community interest in a documentary and discussion event focused on plastic pollution that my office hosted at the Fox Theatre. We screened a short documentary, Plastic Ocean, by The Water Brothers (Tyler and Alex Mifflin), who are local filmmakers and hosts of a TVO eco-adventure series. After the free screening, The Water Brothers joined us for a discussion alongside plastic pollution expert and University of Toronto Professor Chelsea Rochman. Our conversation covered a broad range of topics, including a significant focus on steps that consumers and governments can take to reduce plastic consumption.

As consumers, we need to seek out alternatives to wasteful plastic products and help to hold businesses and governments accountable for their decisions.

As governments, we need to make sustainable decisions easier for consumers, harmonize recycling systems, expand the financial responsibility of plastics producers for our recycling systems, and ban or tax single-use plastics and other similarly wasteful or harmful products. As just one example, Great Britain reduced its use of disposable plastic bags by 85% after implementing a five pence tax in 2015.

We received so much community interest in our plastic pollution event that we’re hosting a second show of Plastic Ocean at the Fox Theatre, followed by a discussion with The Water Brothers and Professor Rochman, at 7 p.m. on Tuesday July 31. Make sure to contact my office to RSVP for a ticket.

We will also partner with community organizations and local students to host a shoreline clean-up event in September.
Lastly, I will be submitting ideas I’ve heard from our local outreach efforts to Minister McKenna. If you care about this issue, and you are unable to make our event on July 31, please share your ideas with my office.
Our government is looking for good ideas and best practices, having already made tackling plastic pollution a priority.

At the recent G7 meeting in Charlevoix, Quebec, our government helped lead efforts to adopt a Plastics Charter. The current U.S. President was, unsurprisingly, unwilling to recognize the importance of this issue. But Canada, France, Germany, Italy, and the U.K. all pledged to address plastic pollution, including by working with industry towards 100 per cent reusable and recyclable plastics by 2030, reducing the unnecessary use of single-use plastics, and helping consumers to make sustainable decisions.

Our government has also committed $100 million to ridding the oceans of global plastic pollution, and taken action on banning microbeads in shower gels, toothpaste, and facial scrubs as of July 1 of this year, with additional bans on microbeads coming into effect next year.

There is much more for us to do. After all, our domestic plastics recycling rate is only 11 per cent.
As the Prime Minister said following the G7 summit: “Canada’s vision is a zero-plastic waste future. It will not be an easy goal to achieve, but the scope of the problem is too significant to ignore.”

With the growing recognition of the problem of plastic waste, and with a federal government motivated to act, we have a unique opportunity to help shape both domestic and global practices, and to help change our wasteful consumption habits. The health of our marine environments depends on it.