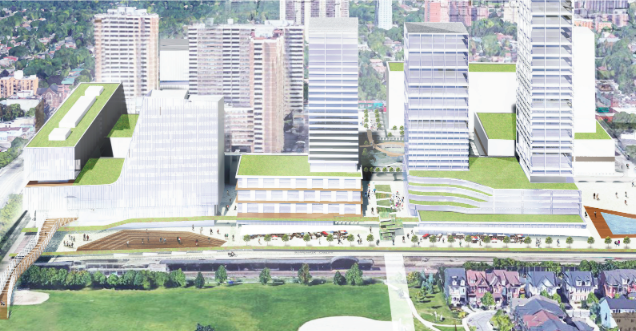 One group presented a vision for Main Square that featured a linear park along the rail corridor, including a north-south connection to the Danforth, with public art. PHOTO: Contributed

What if the Main Square Community Centre was moved to the corner of Main and Danforth instead of tucked behind high-rise apartments like it is now? Or how about creating an amphitheatre at Shoppers World? Maybe Main Station could be integrated into a shiny new mixed-use building.

The real estate professionals gathered at an open house inside Hope United Church last month had lots of ideas about what could be done to develop the corner of Main and Danforth as well as nearby Shoppers World—with an emphasis on could. “The ideas that are presented here are thoughts,” said Richard Joy, executive director of the Toronto chapter of the Urban Land Institute, the non-profit that hosted the event.

Paul Bedford, who was Toronto’s chief planner from 1996 to 2004 and is dean of the ULI’s Urban Leadership Program, reiterated, lest anyone in attendance leave with the impression that anything presented was a real proposal. “They’re not applications,” he clarified during his introduction. “They’re ideas. They are food for thought.”

The urbanist menu was cooked up by way of the Urban Leadership program—which is offered to public and private-sector professionals already working real estate-related jobs including those in planning, architecture, and law—helps teach city builders how to move ideas forward in their respective fields.

An open house and presentations held on the evening of May 30 were part of the six-month program, and the event followed a similar format to a real community consultation for an active development proposal.

Each of the four eight-person teams had about 15 minutes to present their vision for one of the sites. Two tackled Main and Danforth and two took on the eight-hectare Shoppers World site. Bedford noted the two Danforth Village sites were selected because a wave of development is expected in the coming years.

“This general community… is going to experience change. I don’t know exactly how much or when, but I can guarantee you there will be change coming,” he added, noting the province has designated Main and Danforth as a mobility hub targeted for intensification.

The purely hypothetical proposals are a chance for the community to get ahead of the discussion, Bedford suggested.

“This is a real unique opportunity for the community to figure out, what are we lacking? What are the needs that we would love to see met as development takes place?” he said.

First up were the teams tasked with reimagining Main and Danforth. The opening group, which called their project The Main Street Mosaic, focused on two components—improving connections and intensifying development— said team member Melissa Lui of architecture and design firm Perkins+Will. “In terms of connectivity, one of the most important things to us was to activate Main Square,” she explained. To this end, the team suggested moving the existing community centre right to the square. They also chose to underscore the route between the Main GO Station and TTC Main Street Station using different paving.

As Bedford suggested earlier, the construction of new housing is part of the puzzle, and the proposal encompassed more than 1,000 rental units, half of which would be affordable. They would be contained in two new high rises on the Main Square site as well as in a new mid-rise building fronting the Danforth, in addition to stacked townhouses. The Mosaic team also envisioned a linear park along the railroad tracks where storage facilities currently exist, and an assisted-living building and educational facilities to the south.

As in the preceding presentation, the second Main Square group also placed a park along the rail corridor and shuffled the community centre to the southeast corner of Main and Danforth. “Main and Danforth is a hidden gem in Toronto,” said Yvonne Yeung, an urban designer who works for the City of Markham.

Yeung’s group also sought to emphasize the connection between the TTC Station and GO Stations by putting a canopy along the sidewalks that connect the two transit hubs.

The first Shoppers World group saw potential for about 2,800 residential units on their site in a mix.

“Our team has come up with a vision to transform the Shoppers World site into a more compact, complete, and connected community that provides opportunities to live, work, play, and shop,” explained Caitlin Allan, an associate for Bousfields Inc., a planning firm.

“We wanted to accommodate for the growing seniors population in Toronto,” Allan added. So in addition to a mix of condo and rental townhomes and apartments, the group proposed a seniors-housing building in the centre of Shoppers Word.

On top of mixed-use development, the follow-up group brought other ideas to the table. “When we were looking at this project, we really took the approach of really figuring out what values and what exiting opportunities exist here,” said Melissa Winch, an associate at law firm Cassels Brock & Blackwell LLP.

Their project, named Ahead of the Curve, reintegrates parts of the old Ford factory that is currently home to a Lowe’s. The structure would be partly retained for its cultural heritage and house what the group described as a “maker space and cultural market” in materials. “People really want gathering spaces,” Winch noted.

To see each group’s full plan and presentation, visit https://toronto.uli.org/teampresentations-2/