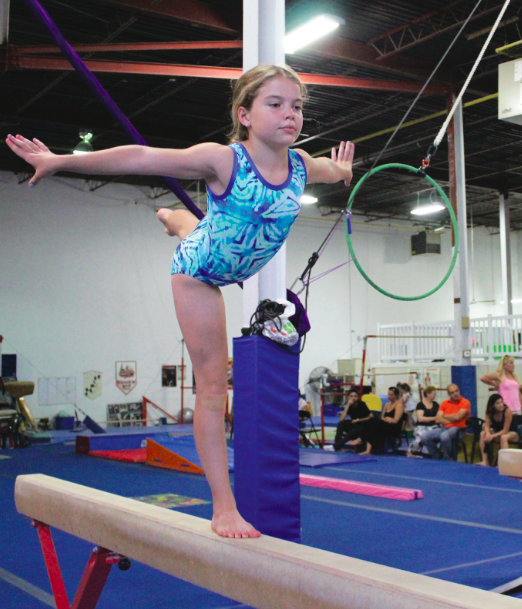 Hayden Ashley wasn’t a natural when she took up gymnastics around the age of one.

Tumbles weren’t uncommon features of her early routines. “I usually fell on my head,” Ashley said, not sugarcoating anything.

You wouldn’t know it looking at her latest results. Ashley, now 11, placed fourth overall out of 150 in the Ontario Championships, which were held from May 31 to June 3 in London.

Her overall score was 37.68 out of a possible 40 points. Up until the final of four performances, she had been in position to medal but was edged out by another competitor in the final moments.

“I was kind of sad, but I was still happy because I did very well,” said Ashley, whose favourite part of it all is “flipping” in the air.

The top-four performance is the result of the Upper Beacher’s dedicated practice regimen. She trains five days a week at Toronto Premier Gymnastics in North York.

The practice works out to about 20 hours a week, which doesn’t leave time for other hobbies.

While her schedule also makes it difficult to keep up with her school work sometimes, she says she’s managed to keep on top of everything.

The hardest part of gymnastics isn’t any one particular movement, she suggests. It’s summoning the strength.

“You have to be really strong, so you have to condition a lot. It’s hard for me, but I’m getting better at it,” says Ashley, who has a message to others getting into the sport: “You might be bad at first, but you’ll get better.”

Her coach, Nancy Sherwin, was not surprised to see how high Ashley placed at provincials.

“I anticipated that if she had a good performance that she would’ve been in the top 10 because she trains very hard and works very well and she’s a very dependable competitor,” said Sherwin.

Sherwin noted that last year was the first time Ashley had qualified for the provincial competition and she placed ninth then. “She’s a little bit better this year, so I thought she’d probably place higher this year.”

Next year, Ashley hopes to make it to provincials once again, though she also has a loftier aspiration.

“I would want to go to the Olympics,” she said, adding, “But I don’t think that’s going to happen.”