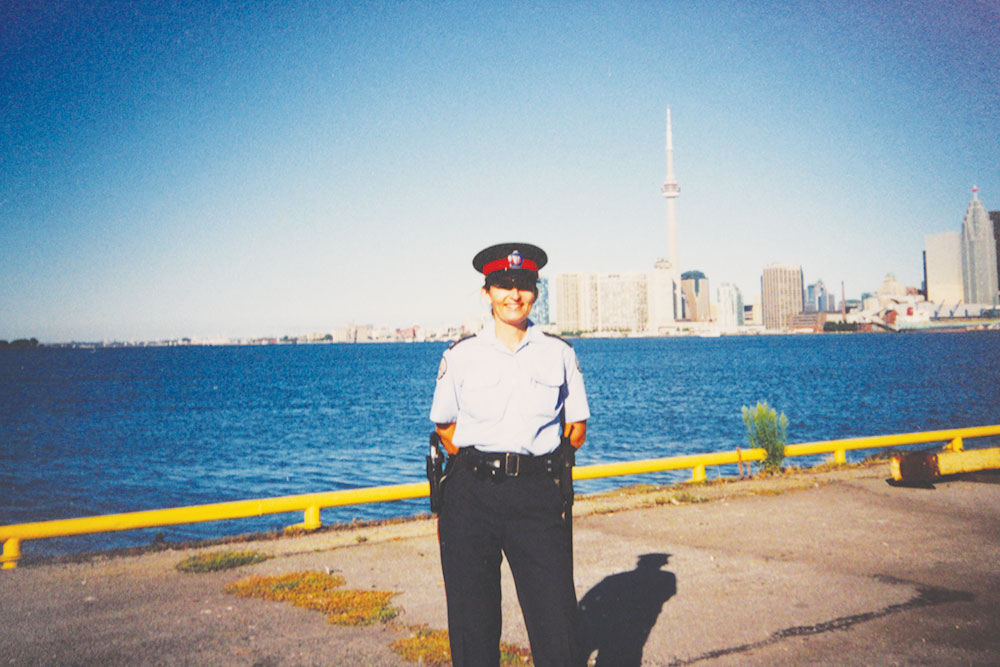 Toronto Police Service Const. Cindy Greenlaw is looking forward to all the free time she’ll have starting this Friday, which will be the first day of her retirement from a job she’s done over the past 30 years.

From the office she shares at 55 Division, where she has been a fixture for her entire career (with the exception of three months of training at 52 Division downtown), she spoke longingly about the prospect of being able to have a “very leisurely coffee” at the end of the week.

Her time here has been anything but monotonous having worked in several departments, and as she counts down the remaining shifts on a whiteboard behind her, she has mixed emotions about entering the next phase of her life.
“That’s bittersweet,” she said of her approaching retirement.

There have been some scary moments, like what she described only as “an incident with a hammer” or the time she got a call about a man pointing a gun at traffic. “It was one of those guns that you would use on your Nintendo, but for those few seconds, you’re just like, ‘There’s a gun!’” she recalled.

Greenlaw has enjoyed the broad range of experience she gained through the different roles she has taken on. The mathematics of mortgage scams interested her when she was working for the fraud department. Similarly, the calculations required to figure out what, exactly, happened at the scene of a crash captured her imagination while on the traffic beat.

“It’s a fantastic job,” she said. “If you come and do the required time on the road, then you can become [anything] and go any direction you want,” she explained. It is a message she wants to get out to anyone considering working for TPS.

Greenlaw likes the chance to learn through work, and one of the subjects she has discovered more about in her decades with the TPS is people. “There’s a lot of good in people, even people that have gone down a [criminal] path, there’s always a reason why they’re there, and there is some goodness in everybody,” she said.

“Even the worst criminal, if you just sit there and talk to them as a person, there’s something in there that’s redeeming,” she added, suggesting circumstances, rather than anything innate, often lead people astray.

Greenlaw has encountered all sorts, including someone who once drove straight into Lake Ontario after being pursued by about a dozen police cars.
Most recently, though, she has been helping people with mental-health issues, as well as vulnerable seniors, in her capacity as one of the police service’s community resource officers. It has been Greenlaw’s responsibility for the past two years to connect these groups to useful resources.
This involves making house calls and following up with community members in need. “I’m talking all day long,” said Greenlaw, who likened the position to being a social worker. “It’s an incredibly rewarding position,” she added.

Retirement is sure to mean a change of pace for Greenlaw, yet her post-TPS life will share some similarities with the position she is leaving.
She plans to continue spending time outdoors. The chance to be outside often was actually what drew her away from a 10-year stint at a travel agency office in the first place, and she has plans to spend wintertime out west skiing. “That’s definitely on the list before the knees give out,” she laughed.

Overall, Greenlaw intends to lay low for about a year, she said, and will continue taking classes towards a degree in criminal justice while also volunteering once a month at 55 Division’s Child Safety Seat Inspection clinic, where at Canadian Tire (1015 Lakeshore Blvd. E.), she’ll help parents make sure their child seats are installed properly in their cars.

She also wants to get caught up on her reading and maybe join a book club. “I am so excited again to be able to have coffee and read,” she said.