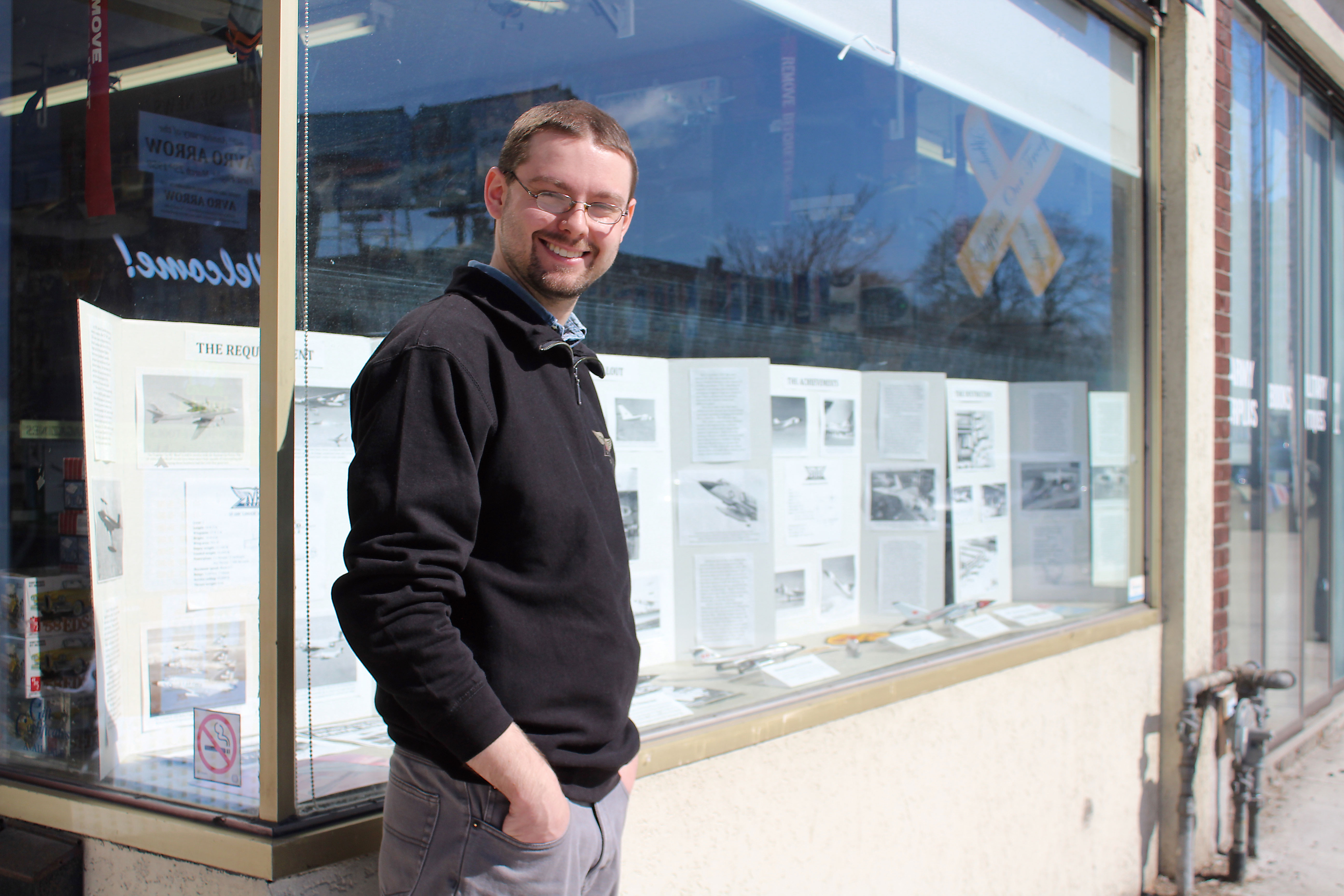 Kyle Hood stands in front of a display he made dedicated to the Canadian-built Avro Arrow. PHOTO: Josh Sherman

SIXTY YEARS ago this March, the Avro CF-105 Arrow, a sophisticated Canadian-built fighter jet from the late-’50s that never made it to full production, took its first flight.

Sixty years later, the iconic supersonic jet lives on at the Danforth—albeit at a fraction of its original size.

In the front window at Wheels & Wings Hobbies (1880 Danforth Ave.), three models of the aircraft, 1/72 the size of the flightworthy variety, were the centrepieces of a commemorative display last month at the hobby shop, a staple here for 11 years.

Though the store doesn’t have any miniature Arrows for sale (the models, like the original, aren’t being produced) it has tens of thousands of other plastic replica planes, trains, automobiles, and military and sci-fi crafts.

“Anything that swims, flies, rolls around—you can pretty much build a model of it,” said Kyle Hood, an employee who described his varied role here as “the friendly face behind the counter” on a recent visit.

Hood, who started working at Wheels & Wings four-and-a-half years ago, is the one responsible for the latest display, which also presents a timeline rated to the ill-fated jet’s journey from advanced concept to victim of a Diefenbaker government funding cut. Each month, he changes up the front display. With the 60th anniversary of the Arrow’s first flight on March 25, the plane was an obvious candidate. The calendar date wasn’t the only reason, though.

“Depending on who you ask, the Arrow is famous—or infamous, legend, myth. Everyone’s got their own opinion,” he explained. But there is some consensus among aviation fanatics, Hood suggested. “Everyone can agree on it was cutting edge,” he said. “It was probably the best aircraft in the world at the time,” he said.

While the Avro Arrow is not available here, that appears to be the exception, not the rule, at the hobby shop, which stocks about 30,000 products, from the kits themselves to add-ons such as decals and tools including air brushes.

“We are just [selling] plastic model kits and the stuff that goes with them: the paints, the glues, the tools, the accessories, the extra parts, things like that,” explained Hood.

Classic cars like Ford Mustangs and military vehicles like the Spitfire are some of the store’s biggest sellers in terms of kits, said Hood. However, Wheels & Wings co-founder Don McCowan said recently the store added Gundam figurines, part of a Japanese sci-fi series, and has started attracting a younger audience. “We’re seeing more and more parents bring their kids in to get them off the telephone,” said McCowan, who has operated the business since ‘86, when he launched it with the late Jim Mores on St. Clair Ave. E. on the advice of his accountant.

“He said I had to find something that would make money,” recalled McCowan.
Now partly retired, McCowan plans to cater more to the younger, less-experienced audience by establishing a classroom in the shop’s basement. From there, students will be able to learn model-building skills from experts.

The business is also in the process of setting up an e-store through its website, www.wheelswingshobbies.com. But until it is up and running, customers will have to continue getting lost among the shelves.

Correction: an earlier version of this story said last month was the twentieth anniversary of the Avro Arrow’s first flight. In fact, 60 years ago on March 25, the Arrow took to the clouds for the first time.