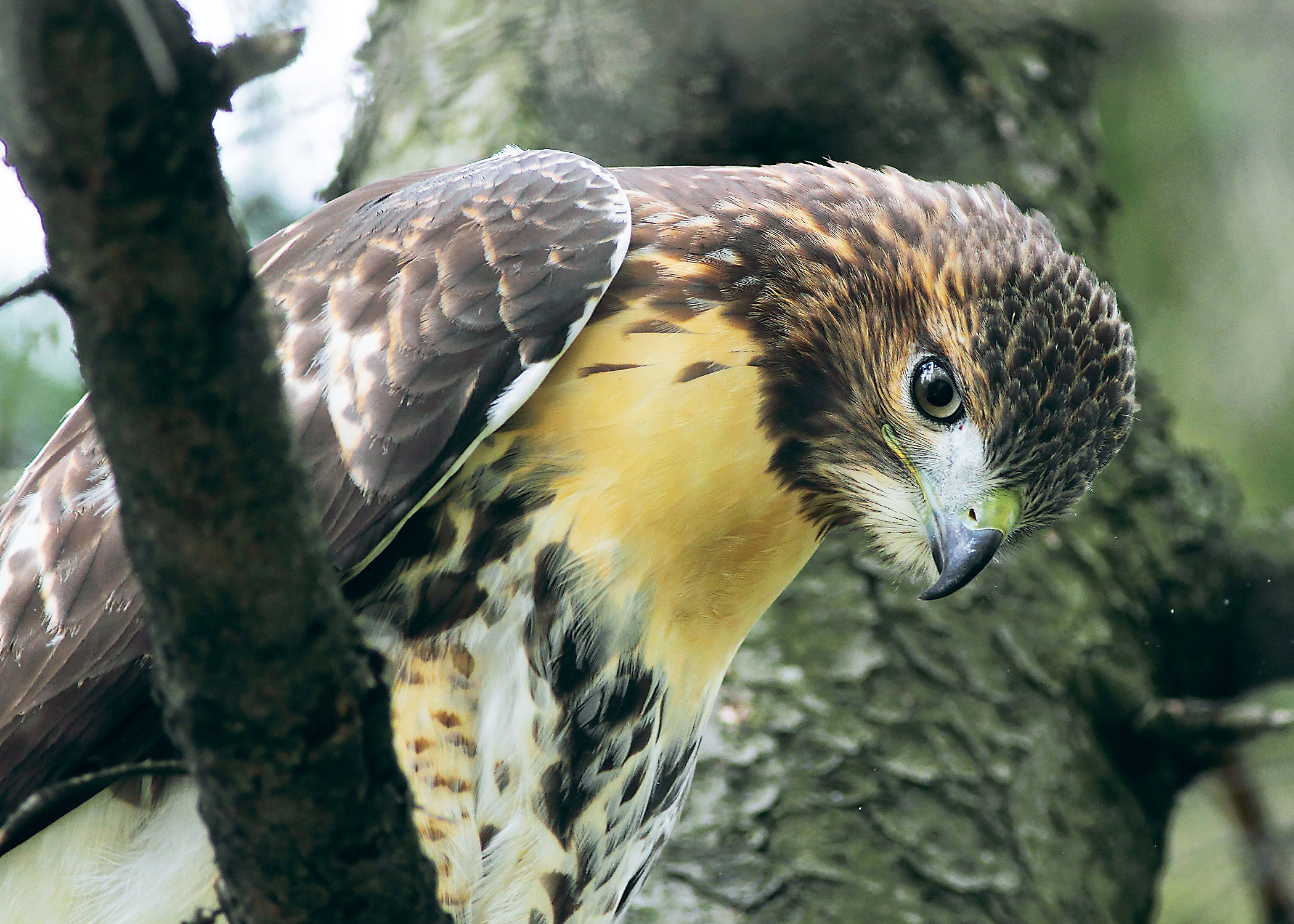 SPRING IS here. Sure, we can feel the warmer weather, but can you hear the spring, too? If you listen closely, you might catch the tune of the first songbirds coming home (not to mention the “melodious” honk of the Canadian geese). In addition to the longer daylight hours and green shoots coming up in the gardens, you can also see some birds beginning their courting rituals. My favourite of these are the red-tailed hawks, who are already building/repairing nests and getting ready to lay eggs.

My own fascination with these hawks goes back to 2006, when my friend Big Frank taught me about the different birds of prey that nest in our city. Many people have read stories about the once-endangered peregrine falcons that like to nest downtown on skyscrapers, apartment buildings, and hotels. But few have noticed the much more prolific red-tailed and Cooper’s hawks, which like to nest on the edges of our woodlots and cemeteries. (If you’re walking by a cemetery, look for hawk nests in the tallest trees that overlook fields.)

In 2009, when I worked in Scarborough near the Town Centre, I was lucky enough to watch a family of red-tailed hawks over a few seasons. I’d only been there a couple of months and had obviously decorated my cubical with pictures of songbirds, hawks, and owls, when a co-worker came by, saw my decorations, and told me about two big birds making a nest just outside. I assumed they were crows, the most common “big bird” people see, but I was ecstatic to see the red-tails! It became my personal mission to watch, record, and document these amazing fowl from a fifth-floor window (only on coffee breaks and lunch hour, of course). For nearly three years, I watched several nests being built, eggs being laid, incubated, and hatched, and parents alternating hunting and feeding duties. I saw eyas branching (jumping from branch to branch) and eventually fledging. I learned baby birds of prey will land on the ground and play. While not as cute as puppies or kittens, it was remarkable to watch them run around, chasing each other, playing in the water coming out of a hose someone forget to turn off, and practicing flapping their wings to build strength. It wasn’t always fun, though. There were several moments of terror as eyas took their first flights and fell to the ground; they weren’t ready. Other times, I watched them hit our own building’s windows and crash into concrete walkways below. Luckily, most times they weren’t seriously hurt. I ended up creating a blog about them, and, after setting up a hawk club, I quickly earned the nickname “Hawk Lady.”

Unfortunately, it didn’t take long for spring to end. By mid-summer, the young hawks were ready to start hunting for themselves and leave the nest. They began landing on trees that were farther and farther away and then one day never came back. What would happen to them? Where would they go? Would they be OK? I know only a few survive the first year on their own. The stress of migration, windows, and starvation take many hawk lives, but not enough to endanger the species yet. Watching them go, I understood the feeling of having an empty nest: my own kids had moved out, after all. Luckily, when the parents have a successful clutch of eggs, they’re more likely to return to the same spot next year. That’s why this spring, you’ll find me out checking last year’s nests to see which are active. (So far, I’m three for three!)

Ann Brokelman is an avid birder and nature photographer. Connect with her at naturephotosbyann.blogspot.ca