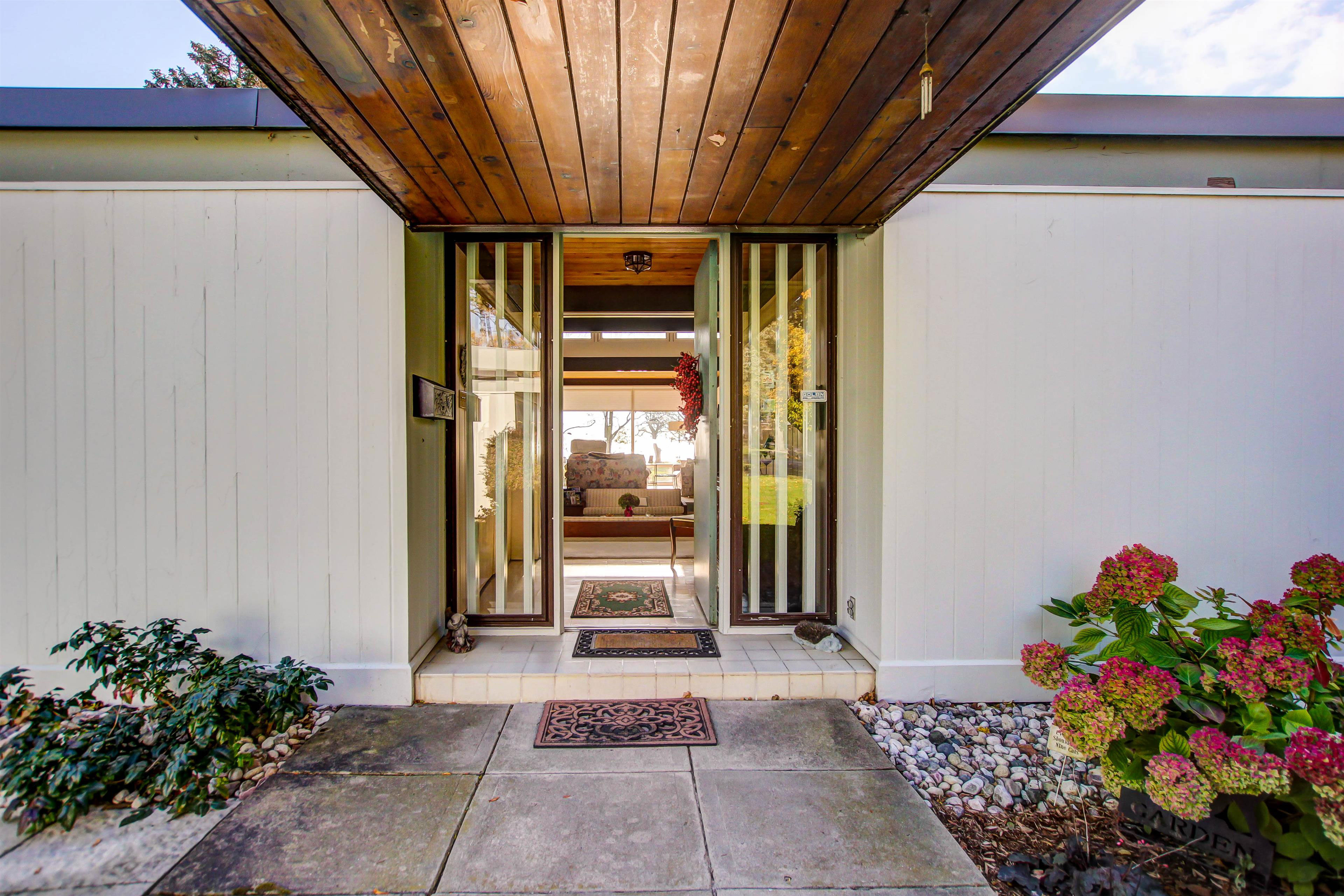 While the rear of the house is nearly all glass, the front of 125 Sylvan Ave. in the Bluffs has few windows. PHOTO: Contributed.

A PIECE of Canadian architectural history is on the market in the Bluffs.

The modernist bungalow at 125 Sylvan Ave. designed by James Murray, the founding editor of Canadian Architect magazine, is listed for a cool $2.3 million.

Perched on the edge of the Bluffs, the seafoam-coloured home has rooms with a view.

Owner Irene Krahn purchased the three-bedroom home with her Beach-born late husband Roger Slute in 1994. She was impressed with the sweeping lakeside vistas and the natural light that filters through windows stretching the entire width of the home to the rear.

“It’s a wonderful retreat; it’s very peaceful,” she said. “We see foxes and deer and lots of wildlife,” she added after a raccoon sauntered along the home’s south-facing back deck. “Although you’re inside you feel like you’re part of the outdoors because of the windows and the light.” The impressive views 125 Sylvan affords are a hallmark of a Murray-designed home, suggests Catherine Nasmith, the president of the Architectural Conservancy of Ontario’s Toronto Branch.

In Murray’s work there “is an incredible sensitivity to light and attention to sight and to views—both inside and outside the building,” she said noting low-sloped roofs, lots of glass and timber interiors are common traits in his residential work.

Krahn didn’t know about Murray, who also had a hand in designing the original Sherway Gardens in Etobicoke, prior to moving in. She only knew that the house, which dates back to the mid-’60s, was a custom build. Through a neighbour, Krahn was introduced to the late architect. She had Murray and his daughter over for a visit several years after settling into the home. One thing she remembers about the encounter is that the architect approved of the kitchen renovation the couple had already undertaken, the only substantial change to the home to date. She also learned the home was one of Murray’s earlier residential projects. “I gathered it was kind of a nice change for him,” she said.

Listing agent Michael Carr highlighted the home’s architecture and the cozy California-esque sunken conversation pit as some of its standout features. “The house, I think, was designed before its time,” he said. “I love all the big windows at the back,” he added.

Carr sees a few potential types of buyers for the home. It could work for a young family. “It’s a quiet area close to good schools,” Carr explained. Also, there’s appeal for empty nesters given its an accessible bungalow in which the only stairs lead to an unfinished basement. Fond of the house as Krahn may be, the seller is motivated because maintaining the large lot has become a burden. She is downsizing into a condo nearby at the Gates of Guildwood.

Her neighbours have been making similar moves in recent years, Carr said. The new stucco and stone McMansions that have been appearing on the winding dead end in recent years are a sign of the neighbourhood’s next generation.

The trend is not limited to the Bluffs, and Nasmith suggested mid-century modern homes are especially at risk of demolition because they are generally significantly smaller than contemporary homes regardless of lot size. “Because of that, even though they’re very beautiful… people are tending to pick them off,” she explained. Krahn would rather the home she shares with her cat, Princess, didn’t get torn down like others of the same era have, including another Murray original, the one-storey Bridle Path home rapper Drake recently had razed.

She would like to find a buyer who will preserve it, even if they do decide to renovate. “I would prefer someone who would love the house,” she said. “I would think it would be a shame to knock it down totally and start over again.”

If two people place identical bids and one wants to maintain the home, they’d be the ones to get it, she suggested.