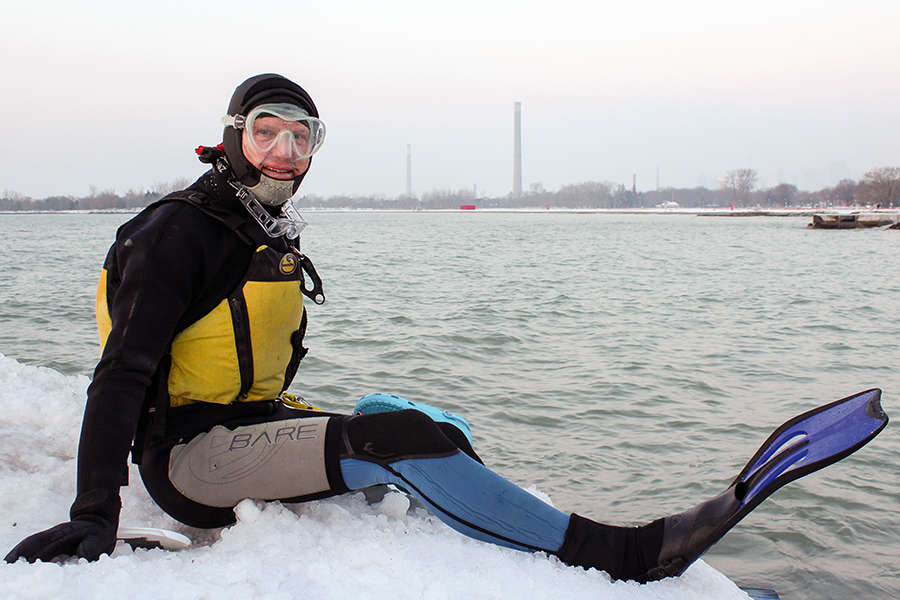 Don't try this at home. Meet Hastings Withers, the man who has a weekly date with the icy waters of Lake Ontario. PHOTO: Josh Sherman

If you’re out on Kew Beach early on a winter morning, you might see a lone figure in a wetsuit and life jacket dive into the icy water.

That would probably be long-time Beacher and swimmer Hastings Withers. For the past three years, he’s hardly missed his once-a-week dip in Lake Ontario—no matter what the thermometer reads.

“I didn’t start in the winter,” Withers, 72, laughed. “I started in the rather balmy fall.”

From there, the septuagenarian swimmer didn’t look back—figuratively and literally, since his preferred stroke is a backstroke. “I just decided to keep going and see how long I could keep going,” he said.

Withers has changed up his route a few times. Departing near the tennis courts at the foot of Waverley Road, he’s swum to Ashbridges Bay and Balmy Beach. Lately, though, he just swims straight out into the lake and back again.

After setting out between 7 and 7:30 a.m., he limits himself to 2,000 strokes—that roughly equals a kilometre by Withers’ count—and then makes his way to shore. “I take shoes with me so that I can land anywhere,” he explained.

It takes between 20 and 25 minutes for Withers to swim from the tennis courts to the western end of the boardwalk. He doesn’t wear a watch in the water, though, so it’s impossible to give a precise estimate. “I have my swim and I’m free for the rest of the day,” he said.

Out on the wintery water, Withers has yet to encounter a fellow swimmer, but he has run into a flock of cormorants. The fowl dove into the water around him in search of a meal. “That was kind of fun,” Withers, a Beach resident for 40 years, said.

Fluttering above the water, monarch butterflies were another of his visitors during a previous autumnal dip. “I’m glad I haven’t seen any sharks,” he joked.

Free from the threat of a great white, Withers has nonetheless confronted other dangers: namely, ice. Because he favours the backstroke for its comfort, his line of vision is limited.

The stroke’s shortcoming has led him to a direct collision with the frozen stuff at least once. “It was like being hit in the head,” he recalled. “It was quite alarming at the time,” he added.

To assuage concerned family members, Withers has promised to always wear his life jacket when taking the plunge. And he usually does have an idea of what to expect on the water ahead of time.

Withers likes to scout out the conditions the day before to see just how icy it is. His commitment to a regular weekly routine helps some, too, in terms of staying up-to-date on conditions.

Swimming is just one of the physical activities Withers continues to pursue. He also kayaks and paddleboards and, when the mercury rises, he laces up a pair of roller blades and goes for a spin with his friends.

“A couple of years ago we rollerbladed for a trip from Lake Erie to Lake Ontario,” he said. Last year, he even entered a rollerblading marathon in Duluth, Minn.

Turns out keeping active in his advanced years is not strictly a matter of health for Withers.

“Well, I think it’s just the kid in me,” said Withers, who grew up in England not far from the shore. “When I’m swimming, I remember the fun it was when we were kids, and we would splash around in the waves and that feeling of playing around is part of a it—a big part of it.”