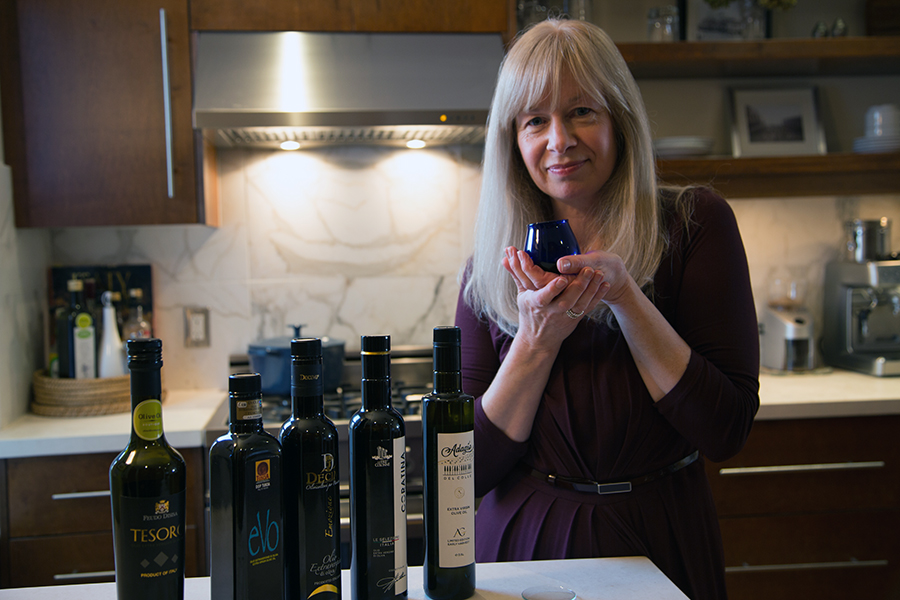 Karen Rapp displays some of the unique olive oils she has on hand. PHOTO: Josh Sherman

Karen Rapp is an olive-oil sommelier, which apparently is an actual thing. If this surprises you, don’t worry—not too long ago, Rapp had no idea about that either.

Four years ago she was on the hunt online for Olio Nuovo extra virgin olive oil, unaware of just how serious people could get over this product of Italy. “I’ve always been a huge foodie, and I’ve always travelled to Italy and I would taste the most amazing oils when I would go there and never be able to find them when I came back here,” she said recently from her home near Monarch Park.

In her search for the elusive Olio, she stumbled upon a website she hadn’t seen before. “I came across this blog written by a guy in New York, and he called himself an olive oil sommelier, and he talked about the course that he took and I was blown away. I had no idea there was such a course. I didn’t know there was such a thing as an olive oil sommelier, but I just became fascinated,” she said.

The sensory-aptitude course was offered through Organizzazione Nazionale Assaggiatori Olio di Oliva (ONAOO), a prestigious olive-oil-tasting school in Rome, and soon after reading about it, Rapp found herself on a plane for Italy to take the class. “It was just like kismet: They do one English-speaking class a year, they had one coming up in three weeks, they had one spot available, and then my work situation happened that I just was able to go,” she said.

Rapp, who was working in television at the time, passed an initial week-long course, which tests students’ abilities to discern between minute levels of aromas and taste. The course is a prerequisite for the three-year professional tasters course, which she completed this past December, becoming the first Canadian to attain that level of certification.

Today she shares her expertise with others, teaching classes for ONAOO and her business Olive Oil Boutique, a venture she started more than three years ago and that imports top-shelf olive oils from Italy. “What I really am passionate about is teaching people, educating people how to make sure what they’re buying is a true extra virgin olive oil,” she said. “Until you taste a really good oil, you don’t know that there’s even a difference,” Rapp said, estimating 80 per cent of the extra-virgin olive oil lining the shelves at grocery stores is not authentic.

To be a true extra-virgin olive oil, it can have only one ingredient: olive juice. That may sound limiting in terms of taste, but Rapp speaks to the variety to be found within those confines.

“The flavour of an olive oil is affected by a couple of things, so it’s affected first and foremost by the variety of olive that the farmer is growing and there’s over 2,000 varieties of olives in the world—over 600 in Italy alone,” she explained. Other factors are what time of year the olives are harvested and the local climate and soil. “It’s like grapes with wine.”

Eventually, Rapp wants to found her own school to teach store buyers and restaurant staff how to identify true extra-virgin olive oil, a topic she has much to say about. “The very first thing they should do is smell the oil,” she advised. A whiff of grass, tomato or artichoke is a good sign. “As long as it has some level of fruity smell, then it’s probably a good olive oil.”

And don’t forget to check the label. Look for the harvest date, because extra-virgin olive oil only keeps for two years sealed. A producer’s name and address is a good sign, too.

“It’s still not a hundred per cent verification, but it’s an indication that that producer cares enough about the quality of their product that they’d put their name and address on there,” she said.

Thanks for this great article. I would love to find out more. Is there a website for Olive Oil Boutique?

Very interesting article. Does Karen have a website or shop/outlet for the olive oil. I would be very interested should she ever hold “classes” or tastings

Olive Oil Boutique is an ecommerce store but I do hold classes & tastings around the city. For anyone interested in finding out more about our classes I think the best thing is to check out our Olive Oil Boutique Facebook page & direct message me from there.

This would make a great gift for those “hard to buy for” people in my life.