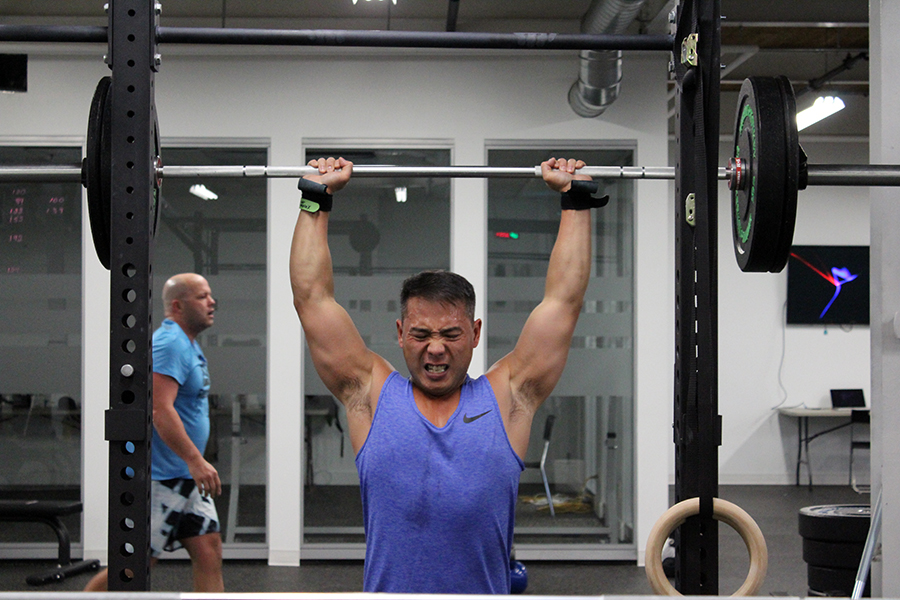 At the crack of dawn on a recent Friday morning, rock music blares inside a 7,000-square-foot warehouse unit in Scarborough, overpowering grunts and the clang of equipment as it hits the padded ground.

Several participants push themselves through grueling athletic routines. They switch from Olympic-style weightlifting to rowing machines to something called an assault cycle, which is like a stationary bike but with a fan that uses air to make pedaling harder the faster the rider goes at it. A wall-mounted digital clock counts upwards towards an hour, when there will be a reprieve.

Few, if any, appear to notice it.

It’s a typical scene from a workout at Mind-Set Strength & Conditioning, a CrossFit gym that opened this past September at 59 Comstock Rd., Unit 3, just off Warden.

“We’re not a traditional gym,” said Beacher and Mind-Set co-founder Dennis Halfpenny, who owns the facility with partners John Du and Ryan Harman.

The three met at CrossFit Toronto, where Harman trained Du and Halfpenny in the proprietary workout regimen established in California nearly 20 years ago. When the trio’s former gym recently closed its Logan Avenue location, they decided to start their own. With Harman acting as head coach, Mind-Set has already attracted close to 50 members.

“For us, we see a large gap around that mental toughness component in most gyms,” Halfpenny explained. “We want you to go and take that mental ability to work, or to your relationships,” he added.

For this reason, workouts – though intense – have a practical component. “We don’t do bicep curls and leg extensions here, because that doesn’t make you a better dad, or a better softball player on the weekend, or a better employee,” he said. Doing deadlifts, which require gym-goers to pick up weights from the floor, transfers to everyday actions like picking up groceries. “That’s why we deadlift,” Halfpenny said.

“Our model is purely based on services. We don’t sign anybody to 12 months. It’s month-to-month because we believe that strongly in our service; our service will keep you here,” he said. “We bring it – everyday.”

For those new to crossfit, the gym offers a six-week beginners’ class to develop the foundational skills.

Membership skews heavily towards Toronto’s east end, though members have travelled from as far as suburban Pickering, Maple and Markham. “We don’t have anyone I would say, past Yonge,” he added.

Married couple Rachel Lutes and Kevin Bratt fall under this category. The Beachers both say they switched to CrossFit because they wanted something a regular gym wasn’t offering.

“I didn’t want to go to the gym and work out alone anymore. I wanted to come and be in a group atmosphere, get to know people, have people say, ‘Hey, how come you weren’t in class yesterday,’” Lutes, who has been doing CrossFit for about eight years, said. “I was kind of tired of the lonely gym scene.”

After his workout, Bratt added, “I’d been training a lot on my own and was finding I really, at my age, wanted to stay healthy and not get hurt but still be active in anything I wanted to be able to do.”

After getting injured trying a CrossFit exercise elsewhere, he decided to join his wife at Mind-Set four months ago. “When you’re trying to do stuff that you’ve seen but never been taught how to do, you’re not necessarily doing it right.”