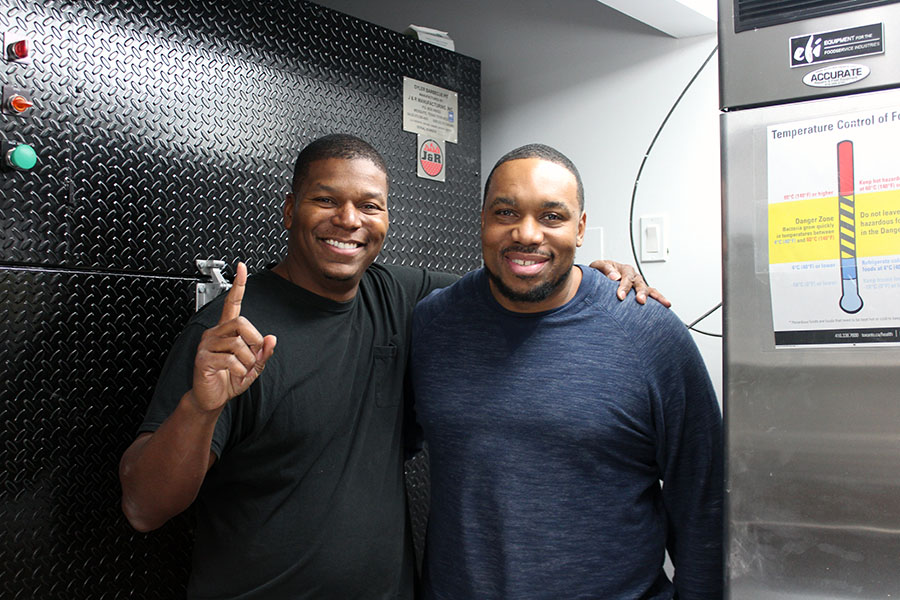 Beach Hill Smokehouse owner Darien List and his cousin, Terrance Hill, who is acting as his consultant, stand before the 7,000-pound meat smoker they had shipped here from Texas.​ PHOTO: Josh Sherman

It can take more than half a day to get Texas-style smoked meat just right over a low flame, says Terrance Hill, who has flown in from Dallas to help his cousin Darien List launch the Beach Hill Smokehouse at Main and Gerrard.

It has taken a lot longer to get the soon-to-be-in-business restaurant together. “In essence, it’s been 15 years in the making,” said List inside the restaurant at 172 Main St. which is slated to open once the city issues the final permits.

Plans for the restaurant began marinating when List and Hill were playing football together at Grambling State University in Louisiana. Hill, who has been smoking meat since he was 11, introduced List to Texan barbecue. “I said to him (Terrence)… ‘We gotta get this taste in Toronto,’” said List.

The menu that Hill—the “Hill in Beach Hill”—is bringing to the Beach will rotate but also include southern staples. “We’re doing brisket, we’re doing spare ribs, we’re doing chickens, turkeys, sausage—and that’s our daily menu,” said Hill, noting it is all going to be smoked in a 7,000-pound 100-per-cent wood-fire smoker imported from the Lone Star State.

“We’re gonna do some things like beef shoulder clod—I’m sure no one here is probably doing that. It’s the shoulder of the cow, you know, it’s where roast beef comes from. We smoke that,” said Hill, a barbecue pitmaster with 20 years of experience.

Prices will range from about $13 for a meat plate and a drink to $25 for a three-meat plate with a beverage. Meat will also be available by the pound, and sides include mac ‘n’ cheese, baked beans, creamed corn, coleslaw, and banana pudding. Craft beer and maybe a margarita machine will refresh guests who will order everything at a counter in the back.

The cousins foresee the Beach Hill Smokehouse becoming a destination restaurant, but List, who lives near Warden and Gerrard, also has a community focus. “If you look up and down this street here, there is not many places people can have a dinner,” he said. “This is a family-oriented community, and there’s not a lot of places to eat.”

When is the opening!? So excited!

Congrats on the opening, I can’t wait to indulge!

Good luck and congratulations! Will see you soon!

I am stuck at home with a broken leg and blown out knee. My brother brought over some of your smoked brisket last week…..he said he had already eaten his……BUT by the time he left, hehad also eaten half of what he brought for me. Great job guys! I cannot wait to come down and do a combo plate! Your food is loved by this foodie!!!!