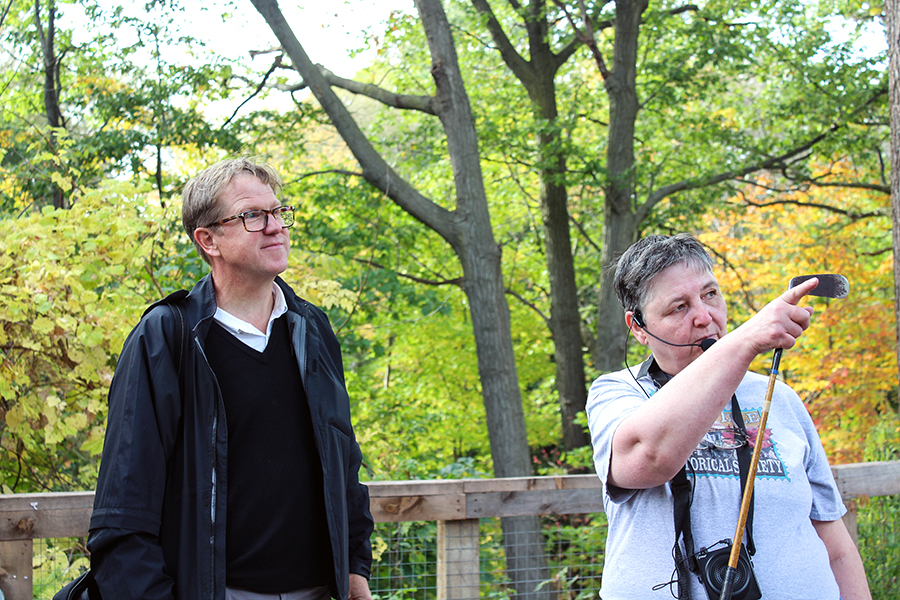 An incongruous accessory to be brandishing around the Beach Hill neighbourhood in 2017, the club would have been right at home on the greens more than 100 years ago.

Maybe it is hard to imagine—especially as modern GO Trains rocket by regularly—but an 18-hole golf course once occupied a large swath of the east end until 1912.

“This is the fourth, or the east, hole, and right next to it was the tee to the fifth hole,” Doucette pointed out to tour-goers at a scheduled stop near Kildonan Park during the Your Home on the Greens: the Lost Golf Course of the East End tour led by the local historian on Oct. 19.

Even though the Toronto Golf Club would have been surrounded by sloping rural land when it opened formally in 1876, its rolling greens were something of a unique sight.

It was the first 18-hole course in Canada, and the second in North America, Scott Burk, who assisted in leading the Beach Hill Neighbourhood Association-sponsored tour, told the about 75 in attendance.

“For what it’s worth, we’re trying to recapture the year 1898 in Toronto for you today,” he explained.

World Golf Hall of Famer Charles B. Macdonald, who played here, opened an 18-hole golf course in 1894, and the very next year the Toronto Golf Club became an 18-hole course as well, Burk said.

Doucette suggested farmers with properties nearby were less enthused with the links, which they perceived to be a “very silly” use of land.

“They let their cows out onto the golf course whenever they could,” she said. “[The golfers] often ended up digging a golf ball out of a cow’s footprint—or worse.”

The site was accessible by transit. A streetcar route ran into the East Toronto township, which was originally a separate municipality, and Kingston Road was a major thoroughfare. The Grand Trunk Railway ran alongside the first three holes.

The railroad, which linked Canada and the U.S., created unique hazards you won’t see on even the toughest PGA course.

“The fairway here was just rotten with clinkers and ash and bits of unburnt coal, and [it was] quite a challenge to even grow crabgrass here, but they did, and they golfed on it,” Doucette explained.

The course, which succumbed to development pressure, was bounded by Coxwell to the west, Norwood to the east, the train tracks to the north and Dundas Street East to the south, and the tour led guests past all 18 holes, stopping several times from 2 p.m. until just after 4 p.m.

Doucette, the author of Pigs, Flowers and Bricks: a History of Leslieville to 1920, said the decision to lead a tour of this golf course was based on Heritage Toronto’s plans to commemorate the one-time club with a plaque.

Burk, a golfer himself, said he finds the sport to be “an interesting lens” to explore the city’s history through.

“I’m very interested in the urban history of this city, and golf is to me, an interesting way—one way—of examining past time,” he said.

“You look at the membership list of this club and in a way you can untangle exactly what was happening at that time,” he added, noting senior Tories and Grits would be on the course at the same time.

The astute amateur historians were not able to verify everything. A red-brick house sitting on an awkwardly shaped property where Gainsborough Road and Wembley Drive fork is believed to be the course’s former clubhouse, but Doucette can’t confirm that tidbit.

“We can’t prove it because there’s no registry, but this matches the maps we have of the back of the golf club house,” she said before the home’s white-picket fence.

Husband and wife Michelle Holland and Chris Little, who took the tour together, had just moved into Ward 32 and wanted to learn more about the area.

“We’ve been curious about a lot of the names of the streets,” Holland said. Asked what stood out most about the tour, she replied, “Well, we’re pretty new to the area, so everything.”

A side street named Golfview Avenue runs parallel to Woodbine from Corley Avenue to Darrell Avenue.

Larry Berti, who lives on Golfview, couldn’t believe how old the former golf course was.

“That was a surprise to me. You’d think the U.S. would’ve developed it,” said Berti as the tour group headed to Bowmore Road Junior and Senior Public School, where the walk wrapped up.

Stanley Thompson, the famous golf course architect, grew up on Walter St. Apparently he played on these east end courses.

Many years ago I participated in a walking tour of my east-end neighbourhood. The guide advised that our entire area used to be part of the “Kingsmount” golf club. He stated that the house at the north-east corner of Highcroft and Eastwood Roads, was once the clubhouse. Through many searches, I have never found reference to a “Kingsmount” club online, nor mention that this particular house had historical significance. I now believe that the guide was misinformed.